The giant hexagon-shaped storm raging atop Saturn’s North Pole is made out of frozen hydrocarbon ice suspended in seven hazy layers stacked on top of one another, according to a study published in Nature Communications on Friday.

The swirling six-sided wonder, which El Reg once dubbed the hexacane, has perplexed scientists since its discovery in the 1980s by NASA’s Voyager 1 and 2 spacecraft. The strange vortex has sides measuring about 14,500 kilometres long – more than the diameter of Earth – and remains intact despite winds that reach 400 kilometres per hour rippling through the ringed giant.

Now, a group of astronomers have analysed images taken from NASA’s Cassini probe to reveal the hexacane’s tower-like structure in more detail.

"The Cassini images have enabled us to discover that, just as if a sandwich had been formed, the hexagon has a multi-layered system of at least seven mists that extend from the summit of its clouds to an altitude of more than 300 km above them," said Agustín Sánchez-Lavega, a physics professor at the University of Basque Country, Spain, who led the study. "Other cold worlds, such as Saturn's satellite Titan or the dwarf planet Pluto, also have layers of hazes, but not in such numbers nor as regularly spaced out". 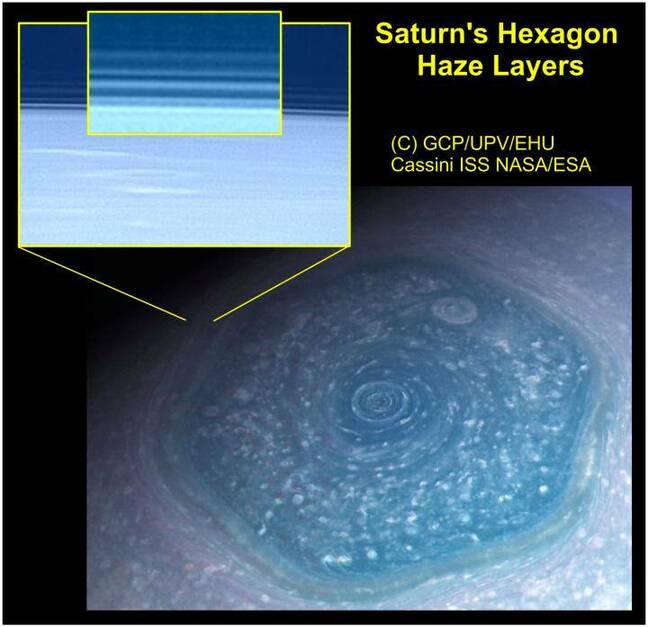 A picture of the different layers in Saturn's hexagonal storm
Click to enlarge ... Image Credit: GCP/UPV/EHU/NASA/ESA

Each layer is estimated to be seven to 18 kilometres thick, and is made up of tiny micrometre-sized frozen hydrocarbon crystals, including propyne, propane, and diacetylene, and possibly acetylene and benzene at the top. Each particle is estimated to have a diameter of 0.07 to 1.4 micrometres. The layers appear hazy as the concentration of particles suspended in each one varies.

The team believes the stack is formed with the help of a powerful jet of wind that blows eastward. The particles settle in a layer depending on their density and the atmospheric temperature. A similar effect occurs on Earth, we're told.

The scientists hope to study any changes in the hexacane’s structure to see how it evolves over time. “Future research should explore microphysical models, the growth, and destruction mechanisms of the observed aerosols, and look for changes in the haze properties in relation to the seasonal insolation cycle,” they concluded. ®