Seven in ten IT pros and executives surveyed by The Register told us they, on average, maintained or increased their technology spending amid the coronavirus pandemic. Those polled also, overall, named Microsoft as their most valued vendor, followed by Zoom, Google, and Amazon Web Services.

We emailed Register readers subscribed to our industry studies mailing list between April 9 and May 4, and 2,280 responded – 57 per cent said they were in Europe, the Middle East, and Africa (EMEA), which includes the UK; 25 per cent in North America; and 15 per cent in Asia-Pacific (APAC).

If there's any doubt who reads El Reg, or at least completes our industry surveys, check this out: 72 per cent in EMEA said they were IT professionals or decision makers, and 15 per cent were CXO level; in North America, the percentages were 77 and 16; and in APAC, 73 and 18. 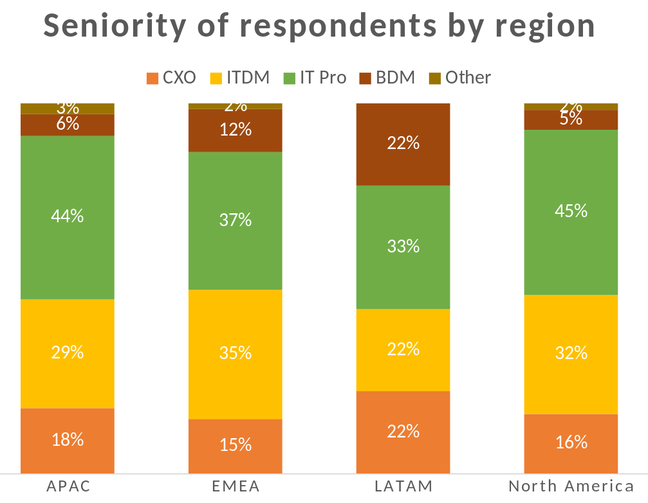 Who completed the survey: a summary of job roles ... Click to enlarge any graph

Regardless of respondents' company size, end-user devices were the top priority, with networking in second place, and a tussle between cloud and security for bronze. This makes sense as remote workers primarily need kit and connectivity to get on with the job from home. 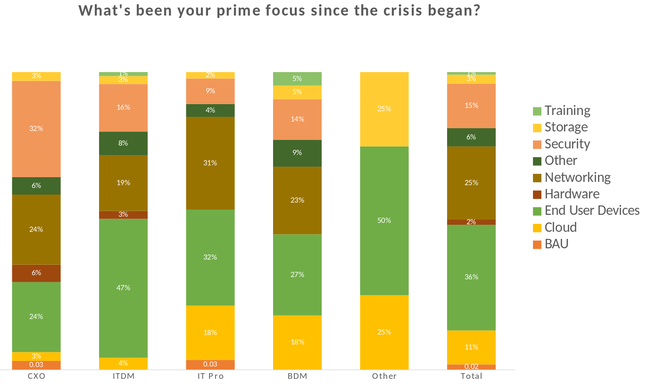 The primary areas of focus identified by readers ... Above, responses grouped by job role, and below, by company size

Overall, 70 per cent of respondents said they they were spending more or the same on technology. Companies with fewer than 1,000 employees were more likely to freeze or maintain spending than larger outfits, as you might expect. One in two small biz, with fewer than 50 staff, maintained IT spending, while 50 per cent of 1,000 to 5,000-head organizations increased it.

Pretty much everyone across the board said their infrastructure was ready to handle the impact of the COVID-19 virus, and this suggests techies were able to, regardless of spending, scale or adjust their systems to support workers relocating from offices to dining room tables, amid the bio-nasty's global outbreak.

Those who chose to maintain or increase spending may have been carried by sheer momentum: server sales were high at the end of last year, and boomed in the first quarter of 2020 as businesses, cloud providers, and telcos snapped up boxes to get ahead of the pandemic lockdowns or to expand their data centers as planned. Meanwhile, billions were spent on cloud platforms in the first quarter by those opting for off-premises gear and software. 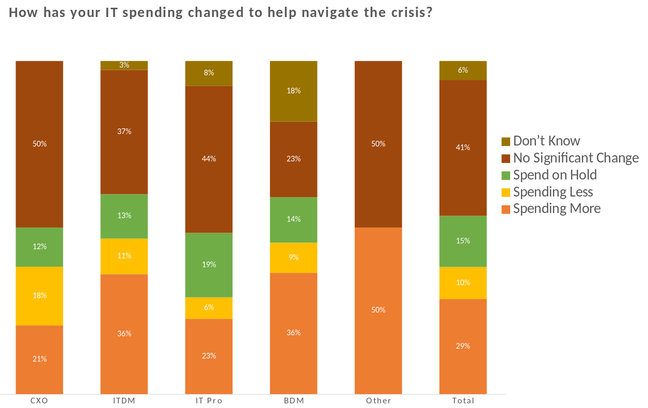 Plans for IT spending amid the pandemic ... Above, responses grouped by role, and, below, by company size

And because you live and work in the real world, it should be no surprise that Microsoft came out as the most-valuable vendor, particularly among EMEA readers and those working at 50-249 and 250-1000 seat organizations.

Microsoft's bread'n'butter comes from business customers like yourselves, and given its range of stuff, from its Office 365 suite to Windows and Azure cloud, we're not at all shocked by this poll result. 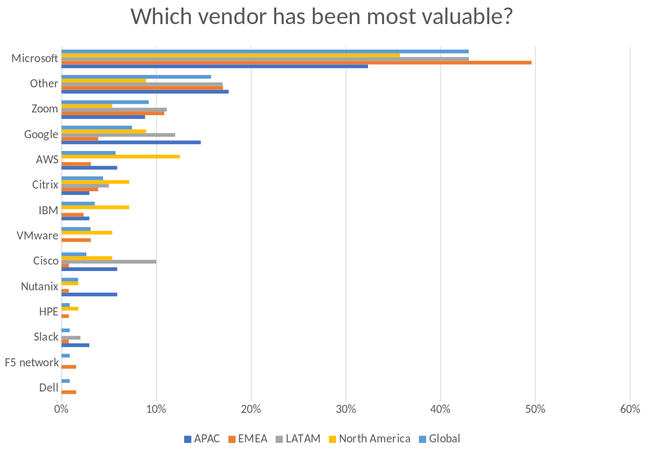 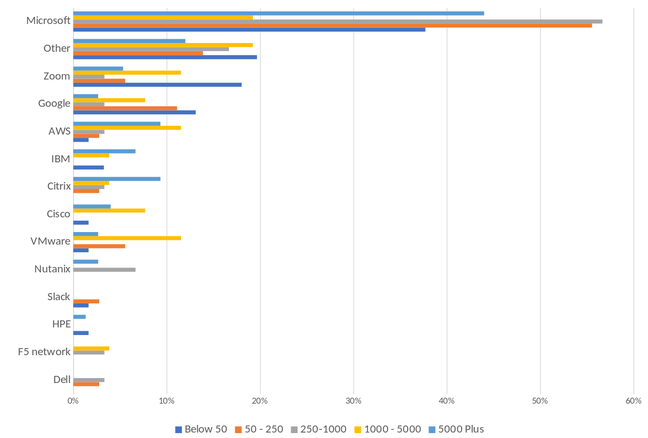 The companies Reg readers said were most valuable ... Above, responses grouped by region and, below, by company size

What is interesting is Zoom proving popular, as a named vendor, which echoes its meteoric rise from 10 million daily users in December to 300 million in the pandemic as people stayed indoors and used its easy-to-use video-conferencing apps to keep in touch with family, friends, and colleagues. The positioning of Google, AWS, Citrix, and IBM, and the virtual absence of focus on enterprise hardware by our respondents, further supports signs of a growing reliance on off-premises tech and cloud-based services.

This all comes after a more informal study showed two-thirds of polled Register readers, on average worldwide, said it was business as usual in their IT departments amid the ongoing global coronavirus crisis. And fewer than one in ten said they were paralyzed by the pandemic. ®

Looking for a job? We're running weekly lists of open positions in the IT world, from engineering and software development to server administration. If you want to advertise a technology role at your organization during the pandemic, email us and we'll list it for free: no catch, no snark. We're here to help.