SoftMaker Office features the classic trio of products: word processor (TextMaker), spreadsheet (PlanMaker), and presentation graphics (Presentations). It has been around for 30 years; this new version replaces SoftMaker Office 2018.

The suite comes in two guises, FreeOffice and a commercial version. The commercial version has additional features including customisable ribbons, document tabs, thesaurus, better spell checking, SVG image support, mail merge, charts, and VBA-like macros (full details of the differences are here). A permanent licence costs £44.90 per year for the full version, or £24.90 per year for a (only slightly) cut-down Home version.

SoftMaker makes much ado about its compatibility with Microsoft's XML-based document formats, whereas alternatives to Microsoft Office like LibreOffice and OpenOffice use OpenDocument XML. It is a surrender to Microsoft in the document format wars, but pragmatic since the business world still tends to use the Microsoft formats by default.

That said, when you start up SoftMaker Office it asks you to choose between Microsoft XML and its own formats TMDX, PMDX and PRDX, which are not generally supported by other applications for import or export. Users find these choices confusing, since the native formats "support all the features" but it is unclear what you will miss by using the Microsoft formats, other than recipients of your documents complaining that they cannot open them.

OpenDocument XML is also in TextMaker, but buried in preferences after installation. Adding to the confusion, the press release we were sent states: "The applications included in the Office suite natively use the Microsoft file formats DOCX, XLSX and PPTX," disagreeing with the dialogue in the product itself.

SoftMaker told us that "TMDX" is a slightly enhanced version of the "DOCX" format. It can store "some additional features that TextMaker has over Microsoft Word". The company added that it has "plans to add ODS and ODP sometime in the future", these being the OpenDocument formats for spreadsheets and presentations. 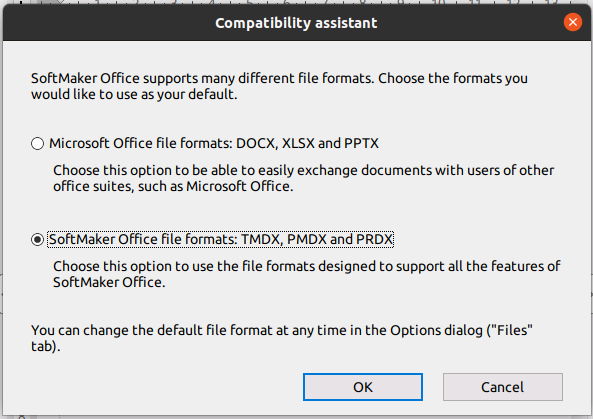 Another area of historic contention in office suites is whether to use dropdown menus or a Microsoft-style ribbon UI. The ribbon arrived in Office 2007, partly intended to make the numerous features more discoverable, and partly to make Microsoft Office more distinctive. It was contentious at the time, and SoftMaker maintains neutrality by giving users a choice at first startup, or later in preferences. Options include light and dark, ribbon or dropdown menus, and a "Touch mode" for easier tablet use. 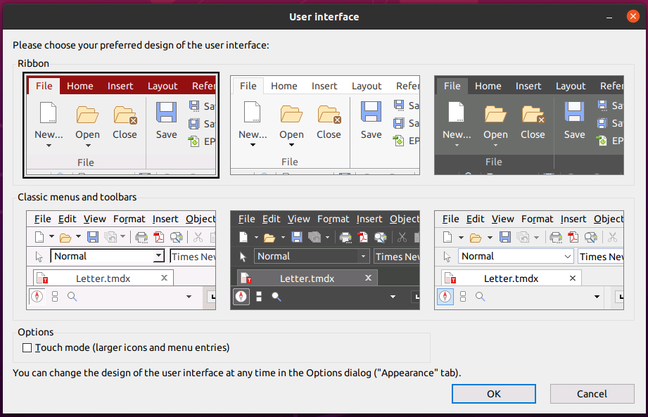 SoftMaker has options for both menu diehards and ribbon lovers

What's new in SoftMaker Office 2021? Not a great deal, it seems. There is integration with an open-source citation management system called Zotero. There is a new database module for mail merge which uses SQLite "in addition to dBase databases" (yes, this does feel like going back in time). There are tweaks to footnotes, endnotes and cross-references, new navigation features, a few new functions in PlanMaker, and a new option in Presentations to create a standalone slide show.

Not much new then, but a quick spin with the suite shows that it has all the essentials; these are feature-rich products. There is even "New OLE Object" in the menu, in the Windows version, complete with Windows 95 dialogue styling, one of a few occasions where the product feels dated.

It is good to support alternatives to products from huge corporations like Microsoft, but why use SoftMaker Office? This is being typed in TextMaker and little things like unnecessary hyphenation and inferior font rendering are obvious. But Microsoft Word does not run on Linux – well, not without Wine or other trickery, so this is another option there. Unfortunately for SoftMaker, the free LibreOffice is a capable performer and developing rapidly. SoftMaker has perhaps a tidier user interface, including the ribbon UI which LibreOffice lacks, but is behind on some features.

Is SoftMaker Office really better than LibreOffice for Microsoft Office formats? Your correspondent is a bridge player and there is Word document in circulation (with a million variations) that describes the intricacies of the game's conventions. The formatting is tight as it must fit on two sides of A4. It has card symbols, multiple tables, two columns, and if anything goes slightly wrong with the precise space occupied by the content in each cell, the document soon gets mangled. In other words, it is a challenging compatibility test. It is worth noting too that there is an interaction with the printer driver in word processor documents, so you will not necessarily get exactly the same appearance on different computers even with Word.

We copied the torture-test document to an Ubuntu system and tried opening it in both LibreOffice and TextMaker. We also took a look in Word Online on Ubuntu, using Firefox. Word Online in Reading mode was pretty much perfect. In Edit mode, however, the font used for card symbols did not display correctly. In LibreOffice the page break went awry with the heading for one column appearing at the bottom of the previous page. In addition, some text was chopped off in one of the table cells. TextMaker got the page break right and the card symbols displayed OK, but the character spacing went wrong next to some card symbols so that punctuation appeared on top of the symbol instead of after it. You can see these issues if you squint carefully at our illustration. In the TextMaker version, there is a a slash character overlaying one of the club symbols.

LibreOffice vs TextMaker vs Word Online: a detail from a tricky Word document

Next I tried an Excel spreadsheet. The default Excel font is Calibri, a Microsoft font. LibreOffice showed this as a missing font and substituted a sans-serif font that was quite ugly and oversized, and the Sparklines in the Excel spreadsheet (which show trends in a small in-cell graphic) did not display. Sparklines were missing in PlanMaker too, but the Calibri font displayed OK. PlanMaker was the winner on this one.

These experiments show that getting perfect reproduction of Office document formats on Linux is still not easy, though considering the challenges both LibreOffice and SoftMaker do a decent job. It is not really a level playing field; there are eccentricities in the details of how Microsoft Office documents render. The good news is that most everyday documents import and export pretty well; the bad news is that if you want every little detail right, there is no substitute for using Microsoft's suite, preferably on Windows.

What about SoftMaker, though? If you need something as close as possible to Microsoft Office on Linux, it is worth a look, though we suggest checking with some typical documents that you work with before drawing firm conclusions on whether it really beats the competition for compatibility. ®