Isn't it cute when a coffee machine addresses you in the first person?

Bork!Bork!Bork! A vending machine appears to have gained sentience and is pleading for help (or an operating system update) in today's submission for the The Register's hall of shame.

Spotted in the wilds of Ilkley by Reg reader David earlier this year, the offending hot drinks unit is, at first glance, simply not functional. However, on closer inspection, one can see evidence of an awakening intelligence within and the presence of an old friend in the form of what looks suspiciously like Windows 7. 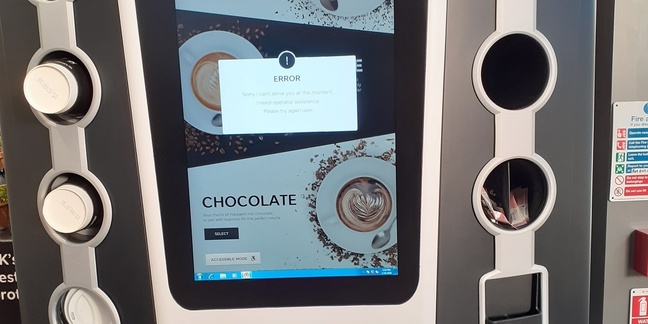 "Sorry I can't serve you at the moment. I need operator assistance. Please try again later... "

Typically found dispensing tea, hot chocolate and whatever the message box is obscuring - we're betting it's "coffee" – the machine would normally bring blessed respite, through automation, to those in need of liquid refreshment.

Worryingly, the OS running this vending machine seems be using the US date format, which means we obviously also cannot trust what it might spit out when asked for "tea."

Localisation concerns aside, stabbing at the screen will not bring forth the usual brew that looks nothing like those on the display. Speaking in the first person, the computer is pleading for an operator to assist with whatever malaise had befallen the thing.

In this case, that malaise could be Windows 7 which, at the time this image was snapped, was just a few days from expiry (unless the machine is running an embedded variant, in which case things might limp on to 2021.) The begging for help is therefore not entirely surprising, although an upgrade to Windows 10 might turn that coffee into an altogether different variety of frothy, brown liquid.

The use of the first person by machines always leaves us slightly queasy, as if the computer is attempting to strike up some kind of friendship or generate some empathy for its plight rather than just dispense the damn drink. The sleek appearance also puts one in mind of a prop for a science fiction series, maybe Doctor Who. In which case the message might indeed hint at a Davros-like intelligence within.

Or, alternatively, it was just an interface designer getting a little too chummy after one caramel macchiato too many. ®