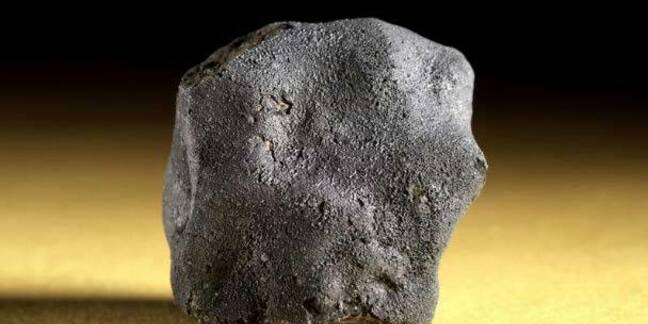 Potentially helping to answer the question of how did we all get here, scientists have found evidence of ideal conditions for the formation of microbial life on Earth – sodium-rich, alkaline fluids present in the early Solar System.

And where did they find this evidence? In a meteorite formed billions of years ago in the system's asteroid belt, and found on our planet in 2000. It turns out the rock contains mineral grains forged in a sodium-rich, alkaline liquid, conditions that, according to McMaster University in Canada, are "preferential for the synthesis of amino acids – the building blocks of life – opening the door for microbial life to form as early as 4.5 billion years ago."

The sample, known as Tagish Lake meteorite and discovered in Yukon, Canada, was analysed by researchers at various organizations including the Royal Ontario Museum (ROM), McMaster, and York University in the North American nation. They managed to pick out features a few nanometres in size on the rock using atom probe tomography.

Calcium, magnesium, and sodium gathered on the meteorite when it was in the Solar System's asteroid belt some 4.5 billion years ago. The unique framboidal structure of these chemicals reveals our system was once a wet alkaline environment that contained large amounts of sodium, the boffins concluded in a study published in America's Proceedings of the National Academy of Sciences this week.

From the Reg archives: Bubbly meteor hints at seeds of life

In effect, these structures are a link between the chemical environment of the early Solar System and the microbial life that emerged on our world. Scientists believe the Earth was pelted by asteroids billions of years ago, and not only did these rocks bring water, they also carried the necessary molecules needed to kickstart the chemical reactions that led to amino acids and life. Now we have a better understanding of where some of these essential molecules came from.

“Amino acids are essential building blocks of life on Earth, yet we still have a lot to learn about how they first formed in our Solar System," said Beth Lymer, co-author of the paper and a PhD student at York University.

"The more variables that we can constrain, such as temperature and pH, allows us to better understand the synthesis and evolution of these very important molecules into what we now know as biotic life on Earth."

“We know water was abundant in the early solar system," Lee White, lead author of the study and a postdoctoral researcher at the ROM, added. “But there is very little direct evidence of the chemistry or acidity of these liquids, even though they would have been critical to the early formation and evolution of amino acids and, eventually, microbial life."

The latest analysis of the Tagish Lake rock helped eggheads answer some of those questions. For example, the acidity level of the early Solar System was low, and liquids were kept at around 80 degrees Celsius.

The team hopes to piece together a more detailed history of the system, and how life emerged on Earth, by studying asteroid samples retrieved from space. “Atom probe tomography gives us an opportunity to make fantastic discoveries on bits of material a thousand times thinner than a human hair," said White.

"Space missions are limited to bringing back tiny amounts of material, meaning these techniques will be critical to allowing us to understand more about the Solar System while also preserving material for future generations." ®

That's way, way, way older than the dust off your oldest PC