Boffins think they have figured out why the magnetic North Pole is heading to Russia at such a relatively speedy rate. It's all down to two gigantic magnetic blobs of liquid iron hidden underneath the Earth’s surface, apparently.

Unlike the fixed geographic North Pole, the magnetic North Pole shifts, and we've measured this movement since 1831. Over time, scientists discovered it was slowly meandering from the northern Canadian coast, across the Bering Strait, and towards Siberia at a rate of around 15 kilometres (9 miles) per year.

Since the 1990s, that shift has been accelerating and now moves up to 60 kilometres (37 miles) per year southwards towards Russia. You can see the rate change in the video below:

Now, scientists from the University of Leeds in the UK, and the Technical University of Denmark, believe they have figured out why this is happening: two blobs of iron deep under the surface moving around. They came to this conclusion after readings of our planet's magnetic field were mapped out, showing the underground iron's movement. As the European space agency put it:

Numerical models based on measurements from space, including from ESA’s Swarm mission, have allowed scientists to construct global maps of the magnetic field. Tracking changes in the magnetic field can tell researchers how the iron in the core moves.

“By analysing magnetic field maps and how they change over time, we can now pinpoint that a change in the circulation pattern of [iron] flow underneath Canada has caused a patch of magnetic field at the edge of the core, deep within the Earth, to be stretched out,” added Phil Livermore, co-author of a paper detailing the findings, published in Nature Geoscience this month. and professor at the School of Earth and Environment at the University of Leeds.

“This has weakened the Canadian patch and resulted in the pole shifting towards Siberia.”

The magnetic north pole sits in between two large patches of molten iron, and as they tug against each other it’s moved south from the Canadian Arctic towards Siberia. Here’s a diagram of what that looks like: 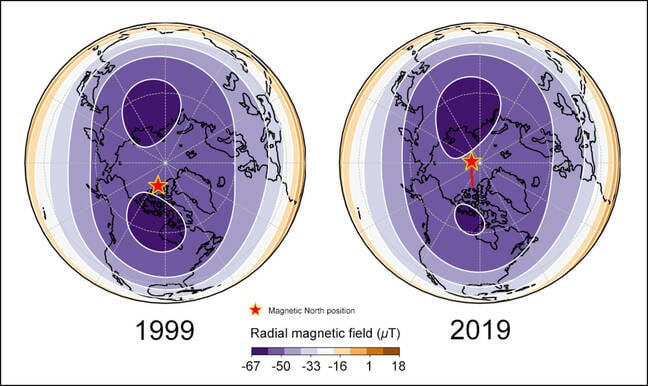 "The patches of negative magnetic flux are both roughly the size of Canada," Livermore told The Register. "The moving pole is a local effect and the remainder of the Earth’s magnetic field hasn’t changed much."

“However, given that the pole’s position is governed by this delicate balance between the Canadian and Siberian patch, it would take only a small adjustment of the field within the core to send the pole back to Canada.” ®