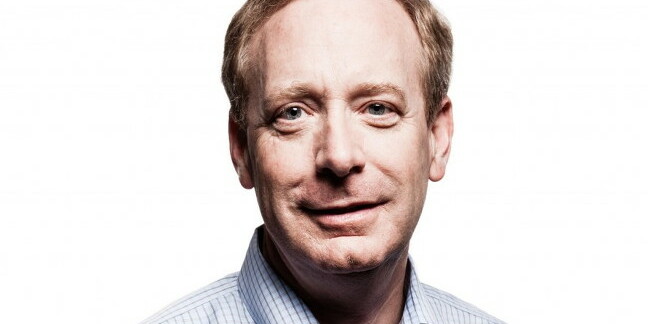 Microsoft president Brad Smith (pictured) has admitted that the Windows giant was "on the wrong side of history" when it came to open source.

While nowadays the born-again company seems unable to resist the embrace (if that's the right word) of the open-source world, it was not always so.

Former CEO Steve Ballmer memorably declared that "Linux is a cancer" back in the day. Goodness, how times have changed in Redmond.

"Microsoft," said Smith during a chat hosted by MIT's Computer Science and Artificial Intelligence Lab (CSAIL), "was on the wrong side of history when open source exploded at the beginning of the century and I can say that about me personally."

He added: "The good news is that, if life is long enough, you can learn... that you need to change."

Indeed. Although judging by our response to our recent Name-a-Microsoft piece, the company still has a way to go before the sins of the past have been fully expunged.

Smith himself has penned a succession of hand-wringing articles over the years, from cheering progress on facial-recognition regulation to standing up for the Microsoft employees that are recipients of the US's Deferred Action for Childhood Arrivals (DACA) programme. Heck, he even talked AI and ethics with the Pope (although we'd wager His Holiness was more interested in finding out how Windows 10 1809 managed to do that to his computer).

As a reminder, Microsoft has cheerfully flogged technology to America's controversial Immigration and Customs Enforcement (ICE) agency, as has its newly acquired tentacle GitHub. Smith did not address this as he talked up the source shack: "We see our responsibility as its steward to make it a secure, productive home for [developers]."

The MIT CSAIL "Hot Topics in Computing" fireside chat also heard the resounding clang of a name dropping to the ground as Smith described a meeting with former US president Barack Obama.

Donald Trump's predecessor warned that a reckoning over surveillance and the data held on private individuals was headed the tech giants' way over the coming years: "There will be a moment when the demands that you're placing on the government will be placed on you as well."

"I thought that was a very insightful comment at the time and I wrote it down. I looked around and was struck that no one else was writing it down," said a modest Smith.

If only he'd thought to pass his carefully written notes on to the Microsoft team responsible for slurping data from customer's computers. That whole European nastiness could so easily have been avoided.

Lessons from the past aside, Smith did have sensible advice for those hoping that apps will be the panacea for the pandemic today. "It's a belt-and-suspenders approach," he said. "We still will need public health officers to interview individuals who test positive, even if they've been using an app on their smartphone."

"We can't base our planning on the assumption that everyone will have this app," he added, before highlighting the importance of data in the making of decisions related to public health during the coronavirus outbreak. This is something that lawmakers would do well to consider. ®