Broken your new Surface Go 2 already? Looks like it's a bit more repairable this time

Less glue, but the silicon remains firmly soldered in place 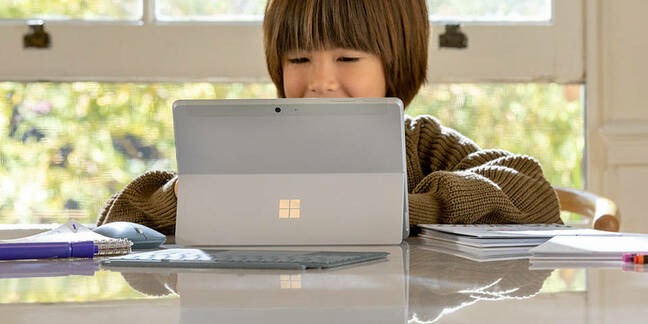 No sooner had Microsoft pushed the Surface Go 2 out the door, torque screw terror iFixit tore it apart to see how it measured up to the appalling repairability of its predecessor.

The original Surface Go scored a woeful 1 out of 10, with the iFixit crew citing a difficult-to-remove screen, tons of glue and a lack of modularity as factors driving the score through the floor.

Though Microsoft's update has added some much-needed horsepower while shaving the bezels of the baby Surface, not all the original criticisms have been addressed.

The first welcome change is the ease of removing the display, previously a headache for wannabe Surface strippers. Where once the thing was festooned with glue, the iFixit team reported that only a little heat and some patient prying was needed to separate display from chassis thanks to Surface Pro X-style foam tape adhesive.

Once the 10.5" 1920x1280 PixelSense display is off and the battery disconnected, the team noted the usual excess of metal shields protecting the chippery within. However, unlike other models, the shields proved relatively simple to extract without damage.

The good news train pretty much came to a screeching halt there. While the MicroSDXC reader can be removed easily enough, along with the cameras, the USB and Surface Connect ports remain soldered in place.

A copper heat sink keeps the CPU cool on the motherboard, but there is not much here to delight an upgrade enthusiast – the memory and storage are firmly soldered in place. While Microsoft may have deployed upgradeable mass storage elsewhere in the Surface range, the Go 2 remains limited to the setup it was purchased with.

The 26.81Wh battery is firmly glued in place and the team elected to leave it alone. It does, however, compare unfavourably with Apple's take on the fondleslab, though it slightly improves on the 26.12Wh of the original Go.

The final score of 3 out of 10, the same as that awarded to the fourth-gen 12.9" iPad Pro, reflects the easier to remove screen and modular ports. Its stablemate, the Surface Pro X (with user-swappable SSD), scored higher at 6 out of 10, but the Go 2 is still an improvement on the glue-tastic 1 out of 10 given to the Surface Pro 7. ®