New domain name registrations spiked in the UK and Australia in April.

In the UK local registry Nominet recorded 132,250 new registrations the month, 15,000 more than in March. It’s an unusual result as Nominet’s last five years of data, lovingly presented here and depicted in our chart below, shows April is usually a pretty quiet month for registrations.

In Australia, the auDA recorded 48,754 new names created, making it “the biggest month for new domain name creations we’ve seen in a while” according to a post from the registrar.

auDA also noticed that the overall number of .au domains fell, but has a pandemic-free explanation for that in the form of “a lower renewal rate for names that were registered in March/April last year during promotions from registrars.” 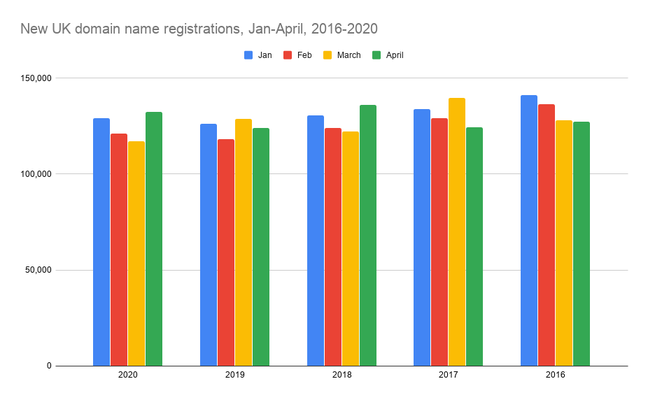 Nominet also spotted a drop in April, to 9,468,306 .uk domains, down 23,000 from the previous month after a ten-thousand-domain climb between February and March.

The UK registry didn’t interpret its data. The Register will have a crack at it: folks who’ve been laid off have decided to have a crack at online business, creating a spike in registrations. On the flipside, some businesses may have decided to let go of domains they’re not using, or lack the people to renew them, or have just – gulp – stopped caring for whatever reason. ®