Xilinx touts 'industry-first' 20nm FPGA for infinity and beyond 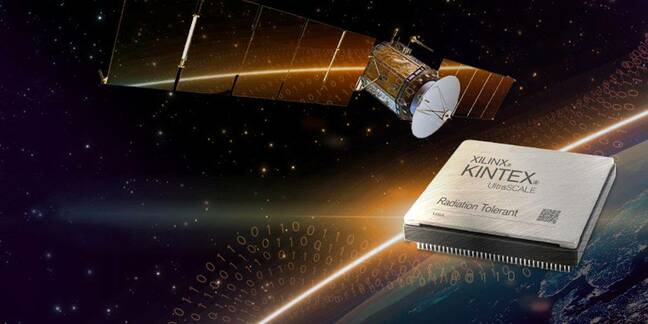 Xilinx's artist impression of its FPGA in spaaaace

Updated Xilinx today launched what it claims is the world's first space-grade 20nm FPGA designed to run tiny machine-learning models within satellites and spacecraft, as well as other tasks.

The Radiation Tolerant Kintex UltraScale XQRKU060 chip, manufactured by TSMC, is the latest addition to Xilinx's family of space-safe hardware. It is, as the observant among you may have spotted, a radiation "tolerant" spin of 2018's XQKU060 [PDF] that has more or less the same specs.

This rad-resistant XQRKU060 – note the R in the part number – can, we're promised, cope with the temperature changes and bombardment of bit-flipping cosmic rays that space gear experiences while out in the obsidian void, as well as run on low power, and is small and light enough to fit in a probe. By radiation-tolerant, Xilinx means it can recover from the effects of cosmic radiation.

This is a step up from previous generations of Xilinx's space chips, including its flagship 65nm XQRV5QV – and the 90nm XQRV4QV inside Europe's Solar Orbiter, launched in February. Jointly operated by ESA and NASA, the spacecraft is heading for the Sun to snap detailed images of its poles and measure its inner heliosphere and solar wind... quite a long way from tech support.

"Historically, space is a pretty risk-averse market. New technologies aren't accepted easily," Minal Sawant, a space system architect at Xilinx, told The Register. "You need to prove it'll be robust and reliable. But over the past few years, we've seen the market trending towards machine learning and now chips need to handle a lot more data processing onboard rather than downlinking back to Earth."

16 years and counting: How ESA squeezed oodles of bonus science out of plucky Mars Express probe

The XQRKU060 is, according to Xilinx, tuned to run modern AI algorithms such as convolutional neural networks, allowing space probes to perform inference on data they receive and make predictions. That means it could do image recognition, such as cloud detection, all on board.

It supports popular machine-learning frameworks such as Keras, TensorFlow, and PyTorch, and contains Xilinx's deep-learning processing unit that acts as an inference accelerator engine. The whole chip is encased in a 40 x 40mm ceramic package to shield the hardware from vibration and shock and cosmic radiation.

Speaking of cosmic rays, to overcome their harmful effects, Xilinx employs what it calls triple modular redundancy that triplicates logic circuits into identical sets of three that take a majority vote on their output for a given set of inputs. If one of the triplets in a set is hit by cosmic radiation that flips a bit and derails its operation, the other two in the set can recover. The provided Microblaze soft RISC CPU can also be set up for triple modular redundancy.

"Radiation can enter the silicon and deposit charge onto it, flipping what was a 0 to a 1 or vice versa," Sawant said. "If one of the three gates has a different output then we can discard it with majority-voting."

Xilinx's chip is designed to last more than 10 years in space: in tests, the XQRKU060 was able to operate for 4,000 hours non-stop at 125 degrees Celsius, and is capable of withstanding at least 80 MeV of radiation energy per centimetre square, we're told.

The chip will be available in September, though prototypes and evaluation kits are out now... for, er, those of you designing spacecraft, that is. ®

A spokesperson for Xilinx has been in touch to clarify that the XQRKU060 performs its TMR majority-voting using software, not hardware.

Chip-accelerated WAN could do wonders in the cloud