The SD Association, which oversees the design of SD cards, has emitted version 8.0 of its specification that promises to accelerate the mini-memory storage standard to a tick under 4GB/s.

As outlined in a whitepaper [PDF] this month, the new spec will let existing SD Express and microSD Express cards employ PCIe 4.0 and NVMe to deliver a top speed data transfer speed of 3940 MB/s.

While the new spec is backwards-compatible, the latest top speed will only come with a card reader capable of connecting to the extra row of pins present on SD Express cards that support dual PCIe lanes.

The SD Association isn’t a lone wolf so those readers will be ubiquitous.

The Association imagines its new spec will be used to capture 8K video in real-time, in Internet of Things devices and in automotive applications. However multi-PCIe-lane-capable cameras are not yet a thing and automakers like to keep their bills of materials a few years behind the bleeding edge. So it may be a while before very fast SD cards are an everyday luxury. 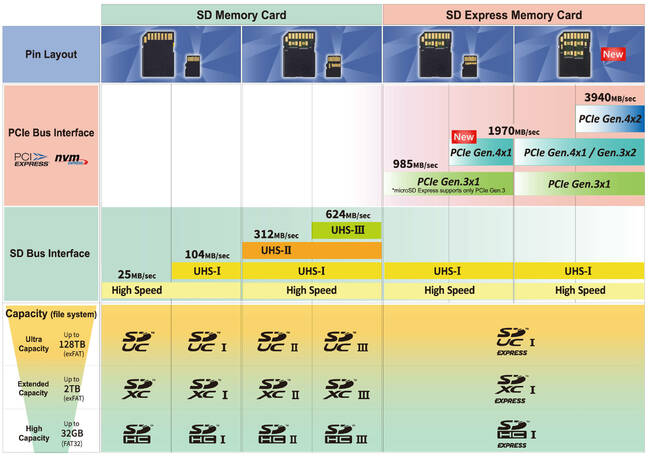 SD Cards: past, present and future
Click to enlarge

The good news is that SD Express and microSD Express cards can still get to 1970 MB/s on a device with a single PCIe 4.x lane under version 8 of the specification, and SD Express can get there with a pair of 3.x lanes. Which is rather faster than many SSDs and, as SD Express can climb to 128TB on a single card, a rather tasty storage option. ®