When you go will you send back a rocket from Edinburgh?

Blighty is preparing for take-off as Edinburgh-based rocket-botherer Skyrora test-fired its Skylark-L rocket from a location in the heart of the Scottish Highlands.

Those hoping to send a satellite to orbit from UK soil might have a while to wait, however. The Skylark-L is only capable of flinging a 60kg payload 100km up. The beefier Skyrora XL will be capable of carrying far greater payloads into Low Earth Orbit (LEO) by 2023.

The test, which occurred earlier this month at the Kildermorie Estate in North Scotland, saw the Skylark-L vehicle erected, fuelled and ignited. The rocket was held down while engineers checked systems were behaving as they should.

The team made much of the fact that it had built a mobile launch complex and tested a rocket within five days. The achievement is impressive until one scans the images accompanying the release, which frankly look basic compared to the NASA facilities space fans are used to. 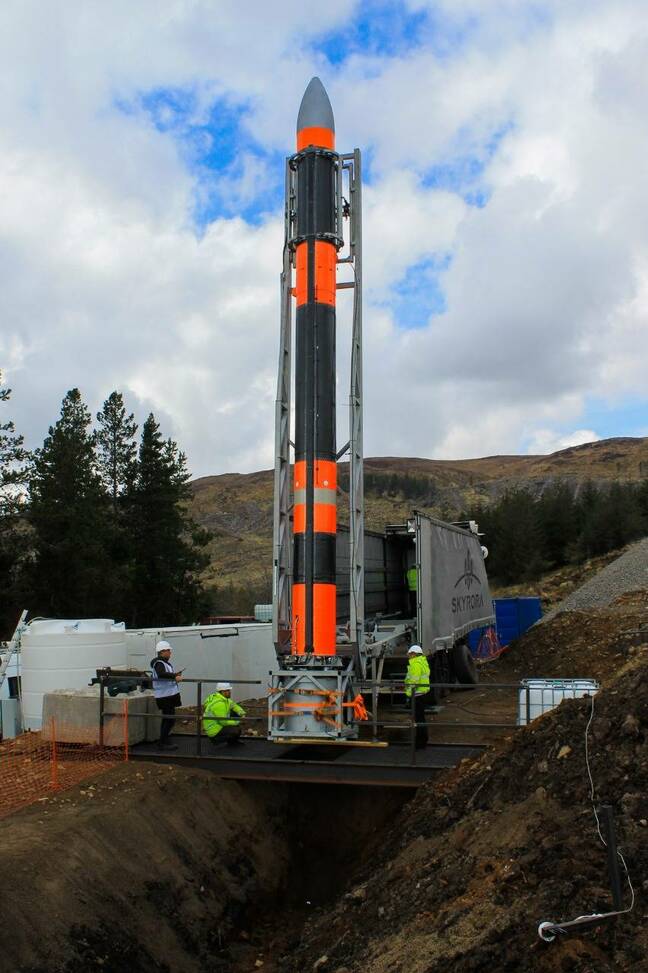 Light the blue touchpaper, then stand well back Pic: Skyrora

A company representative told The Register that the five days also included digging the flame trench visible above.

In response to our worries that those hi-viz workers looked a bit close together and lacked much in the way of virus protection, we were told that: "The test was conducted with the team adhering to the social distancing measures and it is not required by the government to wear PPE. The team acted responsible [sic] throughout the test and followed our stringent health and safety protocols."

COVID-19 quibbles aside, the endeavour still represents the first complete ground rocket test in the UK since the glory days of the Black Arrow, some 50 years ago.

Prior to the static firing, the 30kN engine had been through three hot fires before integration. It was fuelled by a combination of hydrogen peroxide and kerosene (to be replaced by the company's own Ecosene, made from plastic waste). The Skylark-L itself was then mounted on a transporter-erector that was fixed to a trailer.

"It is very hard to oversell what we have achieved here," said operations leader Dr Jack-James Marlow, before trying his hardest to do so: "The whole team has pulled through again to deliver another UK first. We have successfully static tested a fully integrated, sub-orbital Skylark L launch vehicle in flight configuration. This means we performed all actions of a launch but did not release the vehicle."

While the test was indeed a complete success, and validated both the vehicle and its ground systems, there is still a while to wait before a Skylark-L is launched. The company put that first flight from a British spaceport as being "as early as spring 2021". CEO Volodymyr Levykin added: "We are now in a full state of readiness for launch."

We naturally asked why, if things were ready to go, a wait until 2021 was needed. The company told us: "We or anybody else cannot launch from a UK spaceport until the [appropriate] spaceflight legislation* comes into place. The UK Space Agency is working hard to push this forward and Skyrora are supporting them with this.

"Skyrora had a rocket suite to launch and Skylark-L is our second largest launch vehicle out of the suite; launching Skylark-L at this time is in line with our timeline. As well as this, we need to have the time to [analyse] the data in detail to make sure for when we do launch, we get it right!"

When it does finally launch the orbital XL variant, hopefully in 2023, Skyrora will find itself up against some stiff competition in the form of rivals such as Rocket Lab, which is already launching small satellites and now working toward first-stage reusability. Fellow Brit rocketeers Orbex also plan a first orbital launch in the coming years.

Rocket Lab CEO Peter Beck recently observed that the market for small launchers was probably not large enough to support a high number of providers.

Levykin, flushed with success following the test, said: "With the expertise in place and all the necessary hardware at the ready, we are poised to take the next steps in making the UK a serious leader in the space business once again." ®

* The government is still developing regulations to implement the Space Industry Act of 2019. After these are approved by Parliament, the UK Space Agency or the CAA (depending on the vehicle and how far up it's going) will be able to issue licences for "any activities that take place above the stratosphere".