The Devuan team has released Beowulf 3.0.0, based on Debian Buster, but with the systemd init system - now standard in Debian - removed.

The project began in November 2014 as a fork of Debian with an announcement citing "diverging perceptions of the Debian project" after a battle over the adoption of systemd, and promising to be "free from bloat as a minimalist base distro should be." The "vua" in the name stands for Veteran Unix Admins. It is sponsored by Dyne.org, which describes itself as a "non-profit free software foundry."

This is the third stable Devuan release, the first being Jessie in May 2017 and the second ASCII (based on Debian Stretch) in June 2018.

Linux kernel maintainer Greg Kroah-Hartman told The Reg: "Everybody who has ever worked at that level in the operating system has agreed that systemd is the proper solution. It solves a problem that people have. Distros have adopted it because it solves a problem for them." But he added: "If you don't want to use it, you don't have to use it."

What is the issue with systemd?

The objections are both technical and political. "Monolithic init systems (systemd, Upstart and launchd) are by nature difficult to analyse and understand," said Devuan enthusiast Laurent Bercot at the 2019 conference.

According to Bercot, the main alternative to systemd, sysvinit, is also a poor solution, but he argued that systemd is in some ways "worse than what we had before" and that it "does everything in the worst way." The size of systemd, and feature creep as it extends its scope, are things that are in some ways antithetical to the Unix principle of "make each program do one thing well." 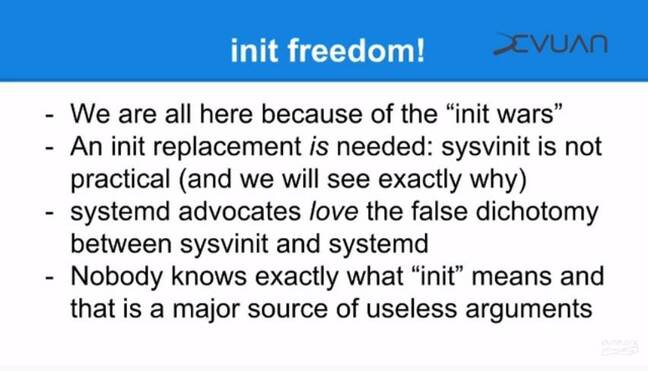 'We are all here because of the init wars' ... A slide at the Devuan conference

Minimalism is a core tenet of Devuan, and the aforementioned conference opened with a session on "the quest for minimalism." The approach is apparent in the Beowulf installation process, which offers just a few core options. The desktop default (if one needs a desktop) is Xfce, which is lightweight by design. For the init system, one can choose between the traditional sysvinit or Gentoo's OpenRC. The system does feel bare-bones, lacking the polish of distros like Ubuntu or Mint, and it is best suited to users with some Linux expertise.

For those who are averse to systemd, there is still plenty of choice, not least Gentoo, which supports systemd but only as "an alternative init system." There is also the recently released MX Linux 19.2, which takes a pragmatic approach where it ships with systemd "present but disabled by default," though the MX Linux team "strongly urges users to remain with this configuration which uses sysvinit."

Despite these options, systemd has won the init wars for now, and is widely adopted. Linux is all about choice, though, so the existence of Devuan, MX Linux, Gentoo and others is welcome. ®

New language will be official, probably within a couple of months
OSes5 Oct 2022 | 30