More than 20 years ago a huge wave of energized interstellar gas was detected passing through the Big Dipper – or The Plough as it's known in the UK. Now astrophysicists think they've figured out the cause of the cosmic commotion: a ripple from a massive supernova explosion passing through the Milky Way.

The weird phenomenon, described as an arc, passes through our galaxy's Ursa Major constellation, and is 30 degrees long and a fraction of a degree wide here on Earth. Unfortunately, it’s not visible with the naked eye: the gas emits mainly UV radiation and faint red visible-spectrum light. Unseen by most of us, it’s been silently pulsing in the background.

"At the time, we only saw a small section of it, and didn’t see any evidence that it extended beyond the region where we first found it," said Robert Benjamin, an assistant professor of astronomy at the University of Wisconsin-Whitewater in the US, and a co-author of a paper into the glowing structure, presented at the 236th annual American Astronomical Society meeting virtually this week. 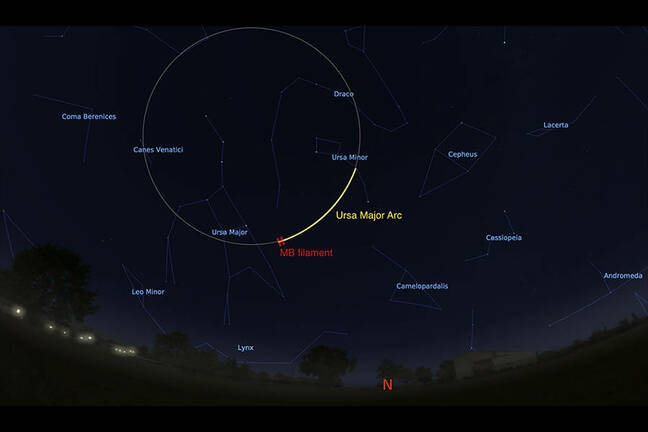 A diagram of tracing the arc of UV emission from the Ursa Major constellation. Image Credit: Stellarium.org. Click to enlarge

"It’s very faint," he told The Register. "It was only because my new collaborators, Andrea Bracco and Marta Alves, decided to study it that they found this new evidence."

Odd emissions of UV and visible-spectrum light are often the result of interstellar dust scattering light, though in this particular case the scientists believed something else was behind the formation of this strange, uniform arc. “The lack of correlation between the Ursa Major arc and thermal dust emission observed with the Planck satellite, however, suggests that other emission mechanisms must be at play,” the paper’s abstract stated [pre-print version].

The academics believe the emission was created by a shock wave from a supernova that may have exploded more than 100,000 years ago, somewhere 600 light years away. The energy from the shock wave may have excited the hydrogen gas in the interstellar medium, making it emit electromagnetic energy that we detected here in our star system.

Peter McCullough, now an astronomer at the Space Telescope Science Institute, clocked the arc in 1997 as a faint red glow emitted from hydrogen gas in the visible wavelength using a special camera. He snapped pictures and showed them to Benjamin.

“In astronomy, you never see perfectly straight lines in the sky,” Benjamin wrote in article. “I got really interested, and Peter and I wrote a paper together, effectively saying, ‘There’s this odd straight line in the sky, what could it be?’”

The mystery, we're told, was left unsolved until a pair of astronomers, Bracco and Alves, at Radboud University in the Netherlands decided to look for the light using data collected from LOFAR, an array of low-frequency radio telescopes in the Netherlands. “Frankly, I could not believe that such a great structure in the sky was not known yet,” said Bracco. “I was looking at ultraviolet observations from 15 years ago.”

Bracco and his colleagues were convinced that the arc was emitting light when amateur astronomers reported finding a section of the same arc using a telescope in New Mexico.

The boffins now want to get a better proximity of the arc’s distance, and trace how its motion over time has changed to verify their suggested explanation of a supernova explosion.

"There are two things we hope to do," Benjamin told El Reg. "First, since we observed this arc in 1997, we intend to go back and reobserve it to see if it has moved against the background of the sky. This would indicate a high shock speed, and also would indicate that the explosion was closer than we currently estimate.

"Second thing to do is to look at other aspects of the interstellar medium in this direction of the sky to see if we can see other evidence for a supernova explosion. Although the arc is very long, it’s also very faint. So far, we haven’t found other evidence for the effect of a shock front." ®

Amateur astronomer strikes it lucky with first glimpse of a Supernova

What are the chances of that El Reg? 1 in 10 MEEELLION