Remember when an error message at McDonald's was all we had to worry about?

Bork!Bork!Bork! Bork goes back to its roots in today's edition of problematic panels, with a seriously distressed McDonald's order screen from back when we were allowed in such places. 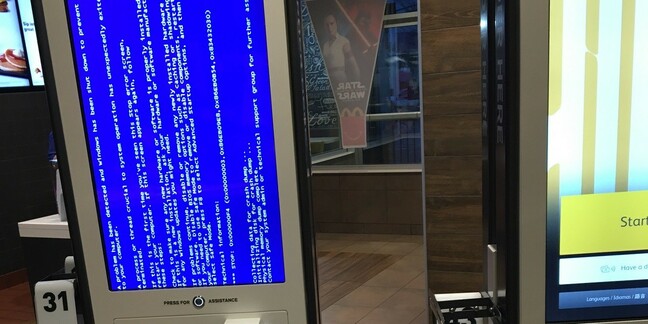 Poor old McDonald's doesn't seem to have a lot of luck when it comes to its punter-operated POS terminals, with either helpful Windows dialogs or a full-on BSOD awaiting the unwary.

Sadly not a Burger Stuffed Of Deliciousness, the Blue Screen Of Death is an all too familiar visitor to many a Windows user. Even though nowadays a user is more likely to see a sad-faced emoticon, the sudden appearance of the stop screen is rarely welcome.

While pinpointing the version of Windows in use is tricky, the error itself normally indicates some sort of hardware issue, although within the walls of the patty pusher, that process or thread crucial to "system operation" is probably ketchup or mustard. Something without which the consumption of the fried delights would be challenging at best.

As for the error itself, we'd suspect that there is some duff hardware at play here; certainly the 0x0000004F and 0x00000003 codes have been known to point at iffy RAM or maybe some failing network hardware. While we doubt the machines have had much in the way of hardware upgrades over the years, it is possible that the atmosphere of grease, disappointment and desperation that pervades some establishments might have seeped in and wreaked havoc.

We'd have hit the "Press for assistance" button, but have a sinking feeling that that would only make things worse.

Still, El Reg never thought we'd find ourselves saying this, we're looking forward to the day when we can once more minimise human interaction in one of Ronald's restaurants and wonder if the person ahead of us in the queue washed their hands before pawing at the screen.

In the meantime, we'll just have to enjoy today's bork as a reminder of how things used to be.

When you bork... through a storm: Liverpool do all they can to take advantage of summer transfer, er, Windows

Bork!Bork!Bork! Bork on, bork on... with hope in your heart.. And you'll never bork alone

Chicago: Why I just grin like a dork... It's my kind of Bork

Bork!Bork!Bork! Even the bus shelters of the windy city cannot escape the borkage

The only way is bork for the UK's embattled rail travellers