You should check how long a vendor intends to support the kit, says Which?

Updated A report from consumer advocates Which? highlights the shockingly short lifespan of "smart" appliances, with some losing software support after just a few years, despite costing vastly more than "dumb" alternatives.

That lifespan varies between manufacturers: Most vendors were vague, with Beko offering "up to 10 years" and LG saying patches would be issued as required. Samsung said it would offer software support for a maximum of two years, according to the report.

Only one manufacturer, Miele, promised to issue software updates for a full decade after the release of a device, but then Miele tends to make premium priced products. 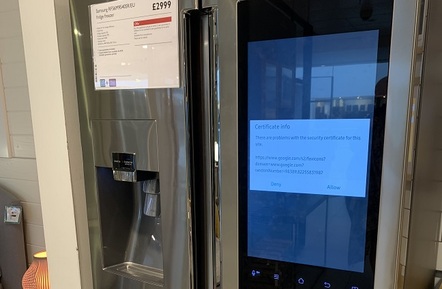 Ah yes, that time someone tried to view 'unsavoury content' on a Samsung fridge in Jon Lewis

Over the past decade, an increasing number of appliances have offered internet connectivity, allowing users to remotely control them via a mobile device, or engineers to remotely diagnose problems. Some devices like Samsung's Smart Fridge Freezers include large touchscreen displays, allowing users to do tasks that would otherwise be performed on a smartphone or computer.

These devices are, obviously, vastly more expensive. A smart fridge typically costs £855 more than one without a Wi-Fi chip whirring inside. Smart dishwashers are £259 more on average, while smart tumble driers (don't laugh, they're a thing) command a premium of £190.

For consumers, that ambiguous (if not outright short) lifespan raises the possibility they could be forced to replace their expensive white goods before they otherwise would. According to the consumer watchdog, fridge-freezers typically last 11 years.

If a manufacturer decides to withdraw software support, or switch off central servers, users could find themselves with a big, frosty brick in their kitchen. In the wider IoT world, there's precedent for this.

In 2016, owners of the Revolv smart home hub were infuriated after the Google-owned Nest deactivated the servers required for it to work. More recently, Belkin flicked the kill switch on its WeMo NetCam IP cameras, offering refunds only to those users whose devices were still in warranty and had the foresight to keep their receipts.

There's another cause for concern. Given that smart appliances are essentially computers with a persistent connection to the internet, there's a risk hackers could co-opt unpatched fridges and dishwashers, turning them into drones in vast botnets.

In the absence of legally binding rules to ensure smart appliances remain supported, punters would be well advised to stick to old-school white goods. Sure, you won't be able to update your Twitter while restocking your freezer, but at least you won't be party to any mammoth DDoS attacks.

Following publication of the article, Samsung made contact to contest the report from Which? A spokesperson said its smart fridge security updates are guaranteed for up to two years, in line with the product warranty period, but emphasised that “it is not limited to two years”. ®