Open-source Chromium web browser and Visual Studio Code editor not free enough for you? Some developers, wary of the big corporate sponsors behind these projects, have taken the code and removed any branding, tracking and links to services to create independent alternatives.

Since Chromium is itself distinct from Chrome, one might imagine that it was already independent, but this is not the case. When Microsoft introduced Chromium Edge in early 2019, Distinguished Engineer Christian Fortini said at a BlinkOn event: "Users of Edge expect that the browser will talk to Microsoft services and only Microsoft services. However, there are 50 or so Google services that have been integrated in the Chromium code base.

"The first thing we did was to disable or replace those services and that actually created some grief for us because there are merge conflicts with changes coming from upstream."

The services covered many areas, inducing sign-on, search suggestions, spell check, geolocation, password sync and more. The services are free but have commercial value by providing data that can be used to inform advertising and marketing algorithms, or in some cases, such as Google Pay, have more obvious benefit to the provider. 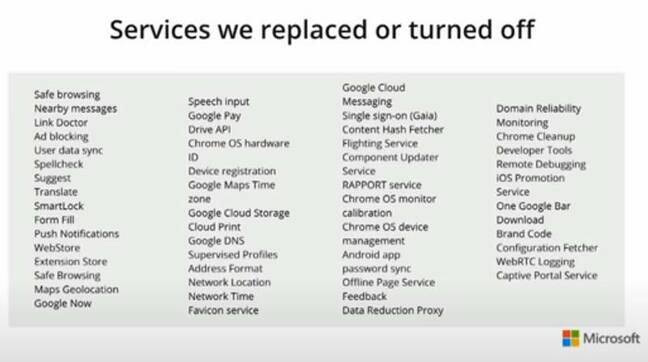 Microsoft's list of services replaced or turned off in Chromium Edge

The snag with Chromium Edge is that it replaces one giant corporation with another. Ungoogled-chromium by contrast simply removes features, with options in some cases for re-enabling them in settings. For example, the default search provider is "no search," which leads to the initially jarring experience of typing in the search bar and getting no assistance with navigation. It is a crude approach in places, with strategies like "Replace many web domains in the source code with non-existent alternatives ending in qjz9zk," but effective.

The options for installing ungoogled-chromium are building it yourself, getting it from a repository, or downloading binaries from GitHub which, the developers warned, "are provided by anyone willing to build and submit them. Because these binaries are not necessarily reproducible, authenticity cannot be guaranteed; In other words, there is always a non-zero probability that these binaries may have been tampered with."

As you would expect, the Windows versions are not signed, leading to the usual warnings.

There is also an issue with installing extensions from the Chrome web store, which does not work through the interface but does if you get the URL of the extension. There is an extension extension to automate this. 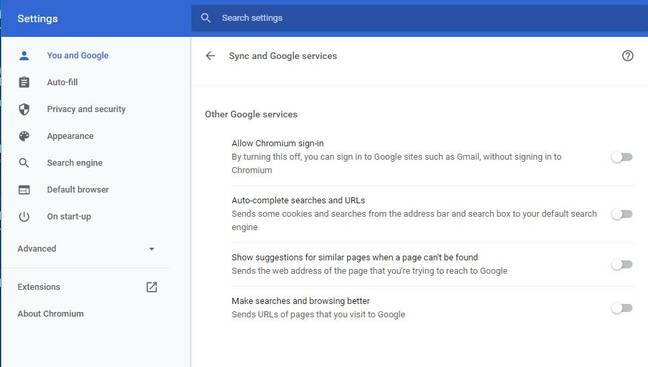 Off by default: Google services in ungoogled-chromium

Similar reasoning applies to the VSCodium project, though the way it works is different. Microsoft's Visual Studio Code is the most popular development tool, according to surveys, and some fret about its dominance.

VSCodium is a build without Microsoft's telemetry or other customisations. It does not have to be a fork since Microsoft intentionally keeps its customisations separate so that you can exclude them by building from the source and scripts on GitHub. VSCodium is just "a repository of scripts to automatically build Microsoft's vscode repository into freely-licensed binaries with a community-driven default configuration."

This makes life easy for VSCodium (or one's own build) but there is a similar issue to ungoogled-chromium for extensions. The terms of use for the VS Code marketplace restrict its use to Visual Studio products so the alternative is to use the Open VSX registry for "VS Code Compatible editors." There is also currently an issue with GitHub authentication; the sort of thing you have to put up with if you go the independent route.

The case for using VSCodium is perhaps weaker than that for avoiding Chromium, since if your goal is simply to avoid Microsoft's telemetry, you can follow the documentation for the official release. Google's hooks in Chromium are deeper, though what they illustrate is the difficulty of meeting user expectations for functionality and ease of use in a web browser without such services; and it is understandable that Google uses its own products to provide them.

Companies like Google and Microsoft do not choose open-source models for charitable reasons, but because they figure that the benefits in terms of things like community engagement, development help, and fulfilling strategic objectives, exceed the cost – which is that it allows third parties to use the same code for their own reasons.

There are trade-offs for users as well. Using the official releases means you get the reassurance of signed binaries, and the convenience of smooth operation with associated services and extensions. The existence of de-branded alternatives is a benefit, though, even for those who do not use them, because their developers are the first to notice if more vendor-specific code slips into the open-source product. ®