Updated Amazon Web Services' EMEA shindig is under way and, in a masterstroke of irony, viewers found the initial experience a little wobbly.

Having sat through a keynote by AWS CTO Werner Vogels, who praised the wonder of his employer's cloud, attendees were about to get stuck into today's sessions. Some, however, encountered a problem in the virtual lobby – one you'd think a service that lays claim to epic scalability and reliability would not want its fans to suffer. Namely: Availability.

So far, loads of buffering when Werner was talking about the billions of minutes of video that AWS have served, and currently 'this service is unavailable' when I try to view the lobby to get to my next session. Not a great experience so far.

Michael was not alone. Register reader Wayne, attempting to attend a session entitled "Introduction to AWS security", told us he had been presented with a "Pages Unresponsive" warning, followed by the dread "This service is unavailable" error. 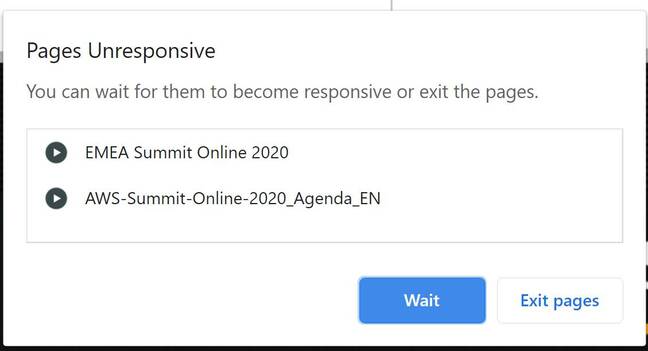 We'd contend that toppling over when presented with an entirely predictable workload is surely the most secure approach. After all, if you can't get in, then neither can the miscreants – that's how it works, right?

Then again, we did note that in one of Wayne's screenshots, Azure had been bookmarked. Hopefully Amazon CEO Jeff Bezos has not got wind of such infidelity, although perhaps those running the AWS Summit might consider an alternative service, even after the mea culpas of Microsoft.

It is not a great look for AWS and its "world class" infrastructure. It also comes hot on the heels of SAP's SapphireNow shindig, which rewarded those with the staying power to stick it out, despite server issues, with a concert by popster Sting.

We can but shudder as we imagine the fate Vogels & co. have waiting for AWS fans committed enough to push through the buffering and availability issues, which we understand improved after the bad start.

The onlinexperiences.com site that seems to be at the heart of the TITSUP* comes from Chicago-based INXPO, which has form with Amazon's events, rather than AWS itself. It dealt with 17,000 customers at the company's 2017 Innovate bash, but perhaps the fully virtual incarnation of the AWS Summit was just a little too much.

We have contacted INXPO to find out if another hamster or two was needed for the wheel and will report back should there be a response.

In the meantime, a support orifice suggested frustrated fans might try closing down a few apps and trying again.

Hello! If you continue experiencing this, try closing other applications that may be running in the background & use the unique link to join the conference again. Also, you're able to get direct tech assistance through the help desk or mailing eventsupport@inxpo.com. 💻 ^AJ

A press rep for Ben Chodor, president of Intrado Digital Media, owner of INXPO, sent us a statement following publication of this article.

"This morning’s AWS Summit experienced about 5 minutes of virtual event platform unresponsiveness as a result of an automatic database procedure. The disruption did not impact all attendees and was not caused by AWS infrastructure.

"Our technical engineers were able to quickly identify the issue and take immediate action to restore the virtual event environment and the Summit proceeded without further disruption."