"We've got over 35 million Xeon Scalable processors deployed and Xeon is the foundation of the world's data-centric infrastructure," Lisa Spelman, corporate veep and general manager of Intel's Xeon and memory group, told a media briefing on Monday. "The third gen really evolves our four and eight-socket processor offerings."

Intel initially hoped to ship 10nm chips in 2015 and finally managed to do so for its Core processor line last fall.

The server chips have gained support for bfloat16, a custom encoding format for representing numbers in 16 bits that's used for machine learning and Vector Neural Network Instructions. Together, these AI-oriented enhancements are referred to as Intel Deep Learning Boost, a feature set introduced in 2019. 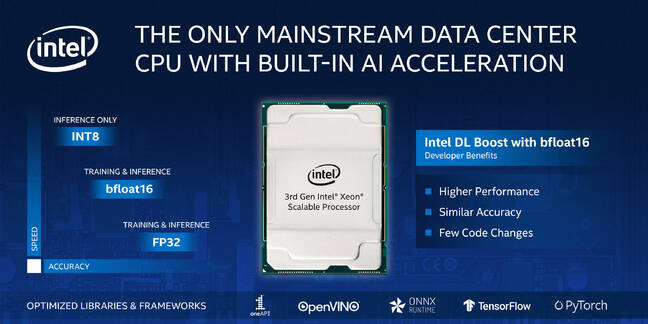 "The introduction of the AI tensor block delivers as much as a 15X for performance gain for AI applications and brings new innovative capability to Intel's broad silicon and software portfolio for AI," said David Moore, corporate VP and general manager of Intel's Programmable Solutions Group.

To complement its four-socket Xeons, Intel is shipping its Optane Persistent Memory 200 series, which, when wedded to compatible Intel processors, offers up to 3TB of PMem per socket and total memory capacity of 4.5TB per socket, including DRAM.