Bork!Bork!Bork! Those wondering if perhaps there were nefarious actors at work back in 2016, influencing the electorate, need look no further than some software on a London bus tidying up after itself.

It has taken a while for the bork team to uncover it, but the shot taken on the number 65 bus to Richmond back in October 2016 seems incontrovertible. Illegal activities appear to have taken place, and we don't mean the mystery can left crumpled at the top of stairs. 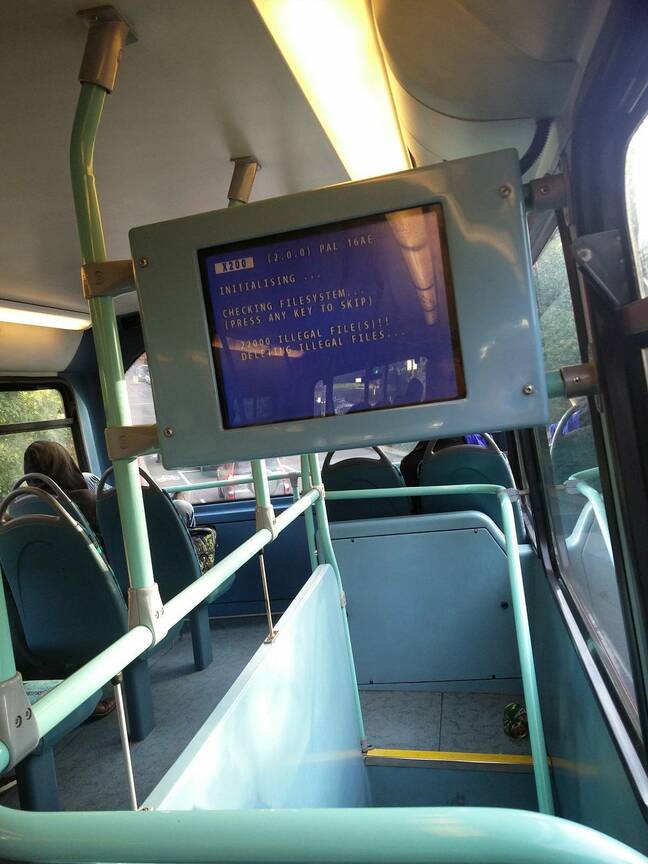 Tidy up after yourselves, m'kay?

Provided by a source (OK, a Register reader) who asked to be identified as "Todor", the screen on the top deck of the London bus has been caught in the act of deleting 22,000 "illegal files".

We will never know what those illegal files did, nor what was being shown during 2016 to passengers on the number 65 to Richmond. Suffice to say that the result of the United Kingdom's European Union membership referendum earlier that year came as a surprise to many, and that it was a few short weeks after this photo was taken that the US elected a former reality show host as president.

Todor hinted at what nefarious schemes might lie behind the blue screen of illegality: "Mobile torrent server? Russian hackers hiding their tracks?" he whispered.

Or maybe it is just an OS trying to deal with disk corruption during boot-up before vanishing up its own fundament.

El Reg would also draw your attention to the hoodie-wearing individual sat in the always popular front-seat position. The uniform of the hacker, for sure. Meaning the screen could be showing a wiping of footprints or a hack aimed at disrupting London's well-oiled transport system.

We'd suggest showing up at a bus stop with a bunch of prams. That tends to have the same disruptive effect, without an illegal file or hacker hoodie in sight.

Transport for London told us: "This appears to have been a technical glitch on one of the CCTV screens, with no personal or private files displayed. We have CCTV in place across our bus network to help keep our drivers and customers safe."

Seen your own fracture in The Matrix? Or just spotted a screen of blue doing something it ought not? Send an email to the bork desk with your photo of failure. ®