Pic Astronomers have mapped the hot gas floating in our Milky Way for the first time – and identified more than a million X-ray-emitting objects in the universe – by piecing together images snapped by the eROSITA telescope.

“This all-sky image completely changes the way we look at the energetic universe,” said Peter Predehl, the principal investigator of eROSITA at the Max Planck Institute for Extraterrestrial Physics in Germany, today. “We see such a wealth of detail – the beauty of the images is really stunning.”

Most of the pinpricks of light in the snaps are from active galactic nuclei spewing X-ray radiation from distant galaxies. These signals, we're told, mark the growth of massive black holes that lie at the center of galaxies. The researchers studying eROSITA’s data believe the telescope will allow scientists to monitor the growth and activity of such black holes over time. 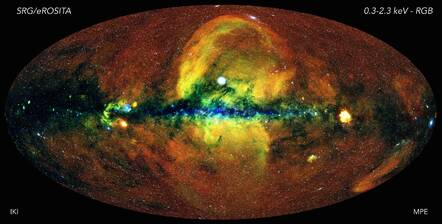 Other X-ray sources include things like clusters of galaxies and binary neutron stars. Some of the big splodges of bright colors are supernovas, where giant stars have died and ejected their mass in explosions. The swathes of color reveal the structures of hot protons and neutrons that make up the gas in the Milky Way.

The final image was captured at a depth four times deeper than previous sky surveys by systems such as the ROSAT telescope 30 years ago, we're informed, and reveals ten times as many X-ray objects. The scientists believe it contains about the same number of sources that have been discovered by all previous X-ray telescopes combined.

The team analyzed about 165GB worth of data collected by seven cameras aboard the eROSITA telescope. They are now working to catalog all the objects to get a picture of all the different astrophysical processes that emit X-ray energy taking place in space. eROSITA is the main instrument on the Spektr-RG (SRG), a spacecraft that launched last year in July and is operated jointly by the Russian Space Research Institute and the German Aerospace Center.

“The SRG Observatory is now starting its second all-sky survey, which will be completed by the end of this year,“ said Rashid Sunyaev, lead scientist of the Russian SRG team. “Overall, during the next 3.5 years, we plan to get seven maps similar to the one seen in this beautiful image. Their combined sensitivity will be a factor of five better and will be used by astrophysicists and cosmologists for decades.“

The boffins hope the X-ray maps may even reveal where some of the first supermassive black holes in the universe formed. ®