WWDC Apple introduced WidgetKit during day two of its WWDC developer event yesterday, describing it as "the best way to bring your app's most useful information to the home screen."

Widgets in iOS are not completely new. In earlier versions, widgets lived in the Today view, accessed when you swipe right from the home page on an iPhone or iPad. Apple intends for widgets to play a bigger role in its forthcoming iOS 14, iPadOS 14 and macOS 11 "Big Sur".

Widgets can now be installed on the home screen, have multiple sizes, and there are new ways to personalise and refresh them with new content. Widgets are not intended to be mini-applications but are rather about "projecting content onto the home screen," according to Apple's Nahir Khan, a manager from the iOS System Experience team. "The average person goes to the home screen more than 90 times a day," said Khan, emphasising the significance of what is displayed there. Widgets do link to applications, though, with the ability to deep link into an app where appropriate, so a well-designed widget has the potential to increase usage of the app to which it relates. Apple has also introduced a new API called WidgetKit, to enable developers to implement the new features. 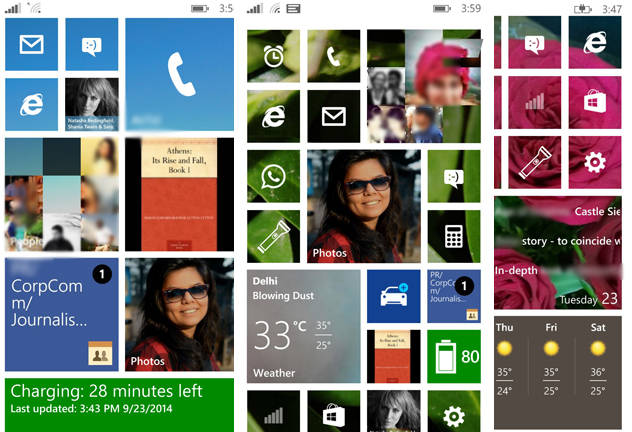 Live Tiles on Windows Phone: was Microsoft ahead of Apple?

Constantly updating icons on the home screen that link to apps? It all sounds a lot like Live Tiles, a Microsoft concept that began with Windows Phone 7 back in 2010 and extended all the way through Windows Phone 8, Windows 8, and Windows 10. They remain a feature of the Windows 10 Start menu today, though with diminished prominence. It is a disappointing outcome for something presented by Microsoft as a key feature in Windows Phone and Windows 8.

What was wrong with Live Tiles and can Apple avoid similar issues?

The idea seems good, but in practice its implementation was annoying. There was a cosmetic issue, which is that a constantly moving, flickering set of icons or tiles is distracting. Individuals vary in their response, but like animated GIFs or mini-videos on web pages, they are not always an asset.

The fundamental issue was that Live Tiles were detrimental to the core feature of an application shortcut: that it allows you to easily launch the application. The tile for the photos app, for example, might display any image it could find, preventing the user from becoming familiar with it as the icon that launches a certain app.

Apple is not taking this path. App Icons in iOS 14 remain as before. "Find a single element that captures the essence of your app and express that element in a simple, unique shape," outline the Human Interface Guidelines – perfect for the core navigation function.

That said, iOS 14 users can install multiple widgets on the home screen should they wish, so if all the apps they use support widgets, something like the Windows Phone approach becomes possible. Apple says that good widgets are "glanceable, relevant and personalized." For example, a calendar widget shows upcoming events, a weather widget the latest forecast, an investment widget the prices of a user's selected stocks.

Widgets will also work on iPadOS and macOS, with larger sizes for larger screens. Apple is pushing developers to use its Catalyst framework (previously known as Marzipan) to bring iPad applications to the Mac.

WidgetKit fits with this strategy, allowing developers to share code across the whole family of Apple operating systems – which the company, borrowing another idea from Microsoft, sometimes calls multi-platform (any platform as long as it is one of ours). It also seems that Apple will discourage frequent widget updates. This is "not a way to drive continual updates on the home screen," said WidgetKit engineering manager Neil Desai.

There is a competitive aspect to widgets. In order to make better use of screen space, there are Smart Stacks, collections of widgets that the user can swipe through. "Smart Stacks automatically rotate to show the right widget at the top," said Khan.

What is the right widget? Apple will use on-device intelligence to make a selection, developers were told, and widgets tie in with the Intents framework used by SiriKit.

Whether iPhone users will take to widgets, or leave them safely hidden in the "Today" view, is an open question. Apple's approach at present is more coherent and thought through than Microsoft managed with Live Tiles – though the community that still misses Windows Phone can still point to it as a feature Microsoft introduced, years ahead of its rival. ®