Honey, I built the app! Amazon's beta no-code dev platform is great for ad-hoc stuff, but not much else – yet

Amazon has unveiled Honeycode, a browser-based tool for building no-code applications that run on the AWS cloud platform, currently in public beta.

Low or no-code app development is touted by companies like Microsoft, Salesforce, Appian, Outsystems and Mendix as a solution to the shortage of developers and the backlog of enterprise applications.

Historically, AWS has focused on professional admins and developers, with all its services API-driven. Honeycode by contrast is aimed at a broad group ranging from end users to pros who like the idea of getting a simple application up and running quickly, and uses the Amazon rather than the AWS brand, though you can connect a Honeycode account to an AWS account. The site has wizards and pop-up help, and looks like the outcome of a lot of effort in the user-friendliness department.

What is Honeycode, though? In essence what you get is a shareable online spreadsheet, which is a capable model for simple applications based on one or more tables of data.

There are templates for things like to-do lists, inventory management and field service incidents. The generated applications are web apps, or you can use them in apps for iOS and Android, though when we tried to install the Android app in the UK it said "This item is not available in your country."

Another compatibility annoyance is that AWS asks you to use Google Chrome, stating: "You may experience issues with other browsers." You can build a user interface (based on sheets in the spreadsheet) separately for mobile and web, or combine the two. 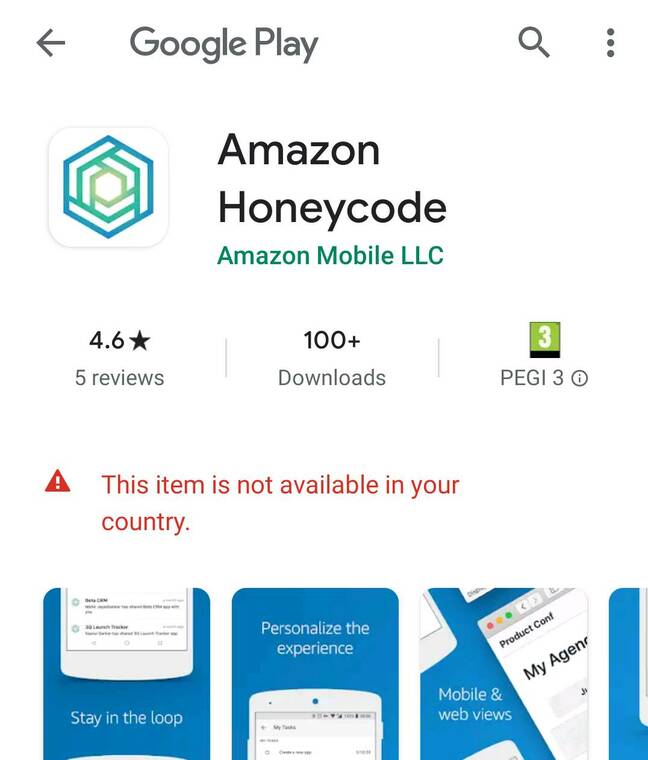 Being spreadsheet-based, Honeycode gives you a decent range of familiar friends like SUM, SORT, COUNTIF, MATCH and other mathematical, statistical, date, string and logic functions. There is also a feature called Automations, which lets users perform actions in response to events, such as row added or deleted, cell changes, date and time reached, or button clicked. The range of actions is limited to sending an email, editing spreadsheet data, or navigating to a different screen, optionally including passing some variables.

There is also a Honeycode API but currently only two functions. GetScreenData gets you the data from the sheet in a Honeycode screen, while InvokeScreenAutomation lets you trigger an action. It appears that you cannot yet write data from the API.

A limitation currently is that Honeycode appears to stand alone in terms of user directory and authentication. Users can add and remove team members, but all within a Honeycode-specific directory – though we understand that active directory integration is possible by special arrangement with the Honeycode team. Otherwise, new members have to create Honeycode accounts and sign in.

Users are also restricted to a single team assigned at sign-up, though they can join additional teams created by others. It also appears that you cannot create public applications yet: they are restricted to team members. 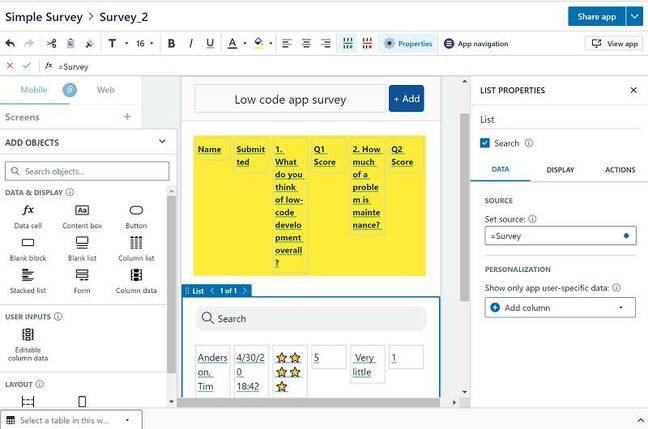 Previewing an app for mobile. Work to do on column headings.

Another problem is lack of connectors to other data. Using the API, developers can read data out of Honeycode and put it somewhere else, but cannot (unless we are missing it in the docs, sorry, "community") import or link to data from another source.

This means Honeycode as it stands is for ad-hoc applications, potentially handy for individuals and clubs, or for quick standalone projects, but not much else. This is the first version though and we would expect this kind of feature to be added, if Amazon is serious about its no-code support.

There is plenty of competition, though – not least from Google Forms and Sheets, which are fine for all sorts of ad-hoc tasks, and can easily be shared with the whole world (if that is what you want). Microsoft's Power Platform is more sophisticated and has the directory and data linking features that are missing in Honeycode, but it's also more unwieldy and expensive.

It is a start but there is work to do before Honeycode is broadly useful – though bear in mind this is a beta release. Why Honeycode though? "Honey, let's code" – or rather, not code? On the bright side, there is no mention of "citizen developers". ®