Taiwan has become the world’s number one chipmaker, according to specialist semiconductor analyst house IC Inisghts.

Teasing its new “Global Wafer Capacity 2020-2024” report, the firm found that as of December 2019 Taiwan held 21.6 percent of the global silicon market, ahead of South Korea’s 20.9 percent. Taiwan skipped past South Korean capacity in 2015 and the report says it will stay on top until 2024.

But China’s on the rise. IC Insights predicts the Middle Kingdom will surpass Japan this year when measured by installed manufacturing capacity. By 2022 China should be ahead of South Korea, too. But Taiwan’s plans to add another 1.3 billion wafers-per-month between now and 2024 will keep it at the top of the list. 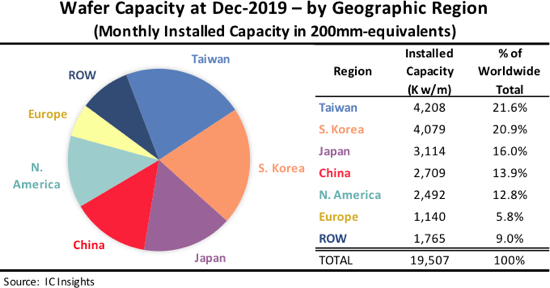 The news is less good for other parts of the world, with the analyst firm predicting share of capacity in North America and Europe will both decline. Local electronics concerns will therefore look to offshore foundries. Which is good for Taiwan and probably South Korea too given current geopolitical tides make doing business in China contentious. ®