NASA is mulling sending a fleet of steam-powered robots, capable of hopping large distances, to Jupiter's Europa and Saturn's Enceladus to study the surface of the moons.

The gizmos, known as Steam Propelled Autonomous Retrieval Robots for Ocean Worlds or SPARROW for short, are quite odd: disc-shaped robots equipped with thrusters, and each inside a spherical wire-frame cage. Each complete bot is about the size of a soccer ball, and is designed to bounce around the surface of a frozen landscape.

Scientists are particularly keen to deploy the bots on Europa and Enceladus; the moons contain in one form or another water, a vital building block for life. Boffins believe it's possible these natural satellites could support extraterrestrial life, and want to send in robots to probe the moons and look for oceans. 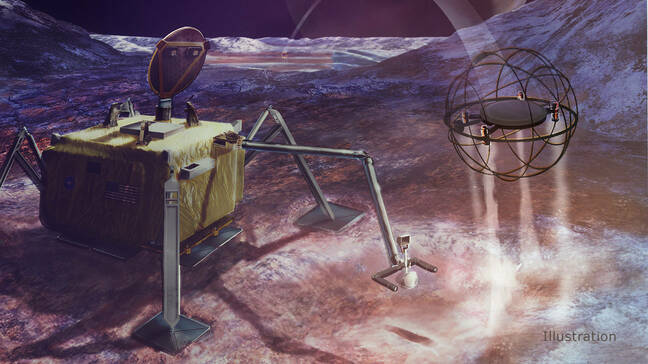 Head of steam ... An illustration of a SPARROW. Source: NASA/JPL. Click to enlarge

It's important the robots don’t contaminate or damage the surfaces with any foreign substances. Thus, using chemical propellants as fuel is out of the question. These moons are also well out into the sticks of the Solar System where sunlight is scant, making it difficult to harvest energy from solar panels for maneuvering.

So, each SPARROW will melt ice found on these moons to create steam. This can then be ejected from thrusters to provide short bursts of motion to propel the ball-shaped robots forward. Thanks to the low-gravity conditions, the hopping devices would experience little or no atmospheric drag, and they could leap many miles at a time.

"The terrain on Europa is likely highly complex," said Gareth Meirion-Griffith, a robotics researcher at NASA’s Jet Propulsion Laboratory (JPL), leading the project. "It could be porous, it might be riddled with crevasses. But SPARROW has total terrain agnosticism; it has complete freedom to travel across an otherwise inhospitable terrain."

Extracting the ice may be a bit more difficult, however. The space gurus envision a lander accompanying the robots that acts as a base. The lander would mine and store chunks of ice for the SPARROWs to melt so that whenever they run short of ice for propulsion, they can return to the lander to pick up more and to drop off any surface samples they may have collected.

Many of these hopping devices can be sent to explore different parts of a landscape or moon, or put together in groups to swarm a particular location. JPL scientists have partnered with researchers from Purdue University and Honeybee Robotics to develop prototypes using computer simulations. ®