Plus: On-orbit battery replacement and scrub-a-dub-dub, my launch is a dud?

In brief Spaceport America took another tentative step toward actually being a spaceport last week as Virgin Galactic took its SpaceShipTwo for another glide back to the runway.

"Unity" was flown by Mark "Forger" Stucky and Michael "Sooch" Masucci and hit a glide speed of Mach 0.85 after being dropped from VMS Eve at 51,000ft.

It was the second flight of the vehicle from the company's base in New Mexico and the higher speeds this time around will be used to verify aerodynamic models. It also, according to the company, "enables certain vehicle systems to operate close to the environment seen during phases of rocket boost on a spaceflight."

Assuming nothing icky crops up in the data, the next phase of testing will see a resumption of powered spaceflights. The team also needs to make "final modifications" to the cabin, where deep-pocketed customers will sit, and carry out detailed inspections of Unity itself and its systems after the testing. 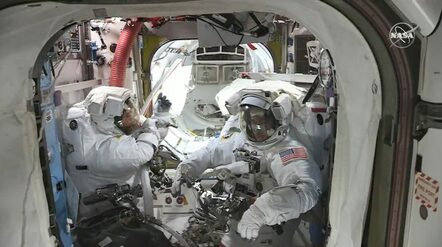 It is the first of four spacewalks in support of replacing the batteries for the starboard truss of the orbiting lab and a second spacewalk is planned this week to remove the remaining nickel-hydrogen battery and fit one more lithium-ion unit and adaptor plate.

The batteries themselves store power generated by one pair of the station's solar arrays, and the spacewalk is the latest in a multi-year effort to replace them with units that should outlast the ISS.

We all scrub together: Arianespace and SpaceX delay launches

The launch of the latest batch of Starlink satellites was postponed over the weekend as SpaceX called off the mission with hours to go.

It would have continued the company's cracking cadence of Falcon 9 launches and seen another 57 Starlink Internet satellites dumped into orbit (along with a pair of commercial Earth imaging satellites for BlackSky, along for the ride).

The Falcon 9 first stage itself has seen action four times previously (two being Starlink launches) and the company plans to recover it after launch from Kennedy Space Center's LC-39A via drone ship stationed in the Atlantic.

However, a mystery issue requiring extra "pre-launch checkouts" cropped up, and the company has yet to issue a new launch date. The change means that the next Falcon 9 launch is likely to be one for the US Space Force from Cape Canaveral Air Force Station's SLC-40 on 30 June.

SpaceX was not along in suffering the curse of scrub as the return to flight of Arianespace's Vega was postponed due to uncooperative weather. The first attempt was scrubbed with less than an hour to go while the second was called off before coverage could even begin.

The rocket is carrying 53 satellites to orbit on behalf of 21 different customers and is the first launch of the booster since last year's failure, which resulted in the loss of the payload; a United Arab Emirates Earth observation satellite. ®