The Document Foundation has released a second beta of LibreOffice 7.0, with general availability expected at the beginning of August. 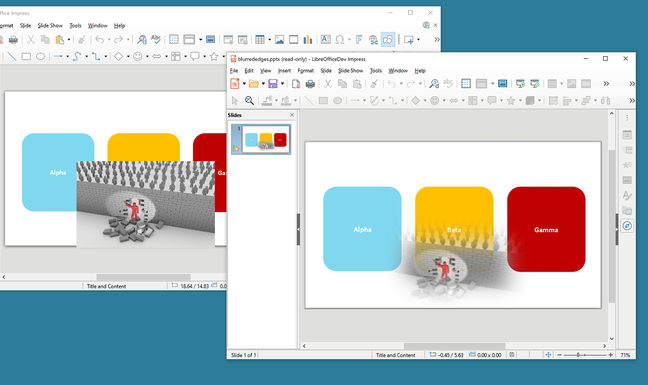 The LibreOffice release cycle brings a significant new build every six months, so this one is the follow-up to 6.4 in January. The major version number gets bumped every two or three years. The team follows a fixed schedule, arguing that: "Time-based release trains have been shown to produce the best quality Free software."

The initial major releases are intended for early adopters, with mainstream users invited to wait for a minor point release. The suite consists of five main applications: Writer, Calc, Draw, Impress (presentations) and Base (database). There is also LibreOffice Math, for working with mathematical formulas.

In this release Mac users get a new icon set, called Sukapura, which follows Apple's recommended colour palette as defined in its Human Interface Guidelines. This is now the default on the Mac and a big cosmetic improvement.

There is also a major, though less visible, change on Windows, which is that the Cairo/OpenGL backend has been replaced with the Google-maintained Skia library, as used by Chrome but also many other open-source products, and the Vulkan GPU/CPU acceleration API. This explains, perhaps, why when you run LibreOffice 7, an Nvidia "GeForce Experience" option pops up if you are using an Nvidia GPU. This should give better performance, though you are most likely to notice if you are dealing with large documents or complex graphics. 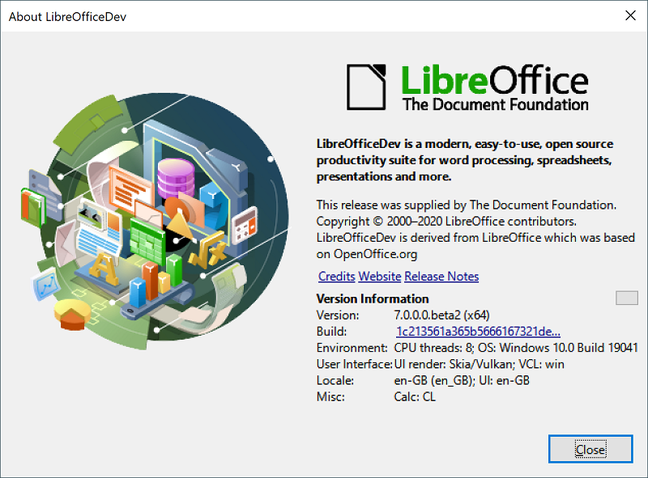 On the graphics side, there is also new support for a glow and "soft edges" effects, which does not sound like much, but the lack of the latter was enough to wreck a PowerPoint graphic, so this is important for interoperability.

The test document still looks wrong on the Mac, though. Apple's Keynote could not display it either; it was perfect in PowerPoint on both Mac and Windows. You can also now use semi-transparent text in Writer.

Microsoft Excel is limited to just over 1 million rows and 16,384 columns, so LibreOffice is catching up on columns and leaping ahead in rows, presuming you believe that such a large spreadsheet has any plausible use. 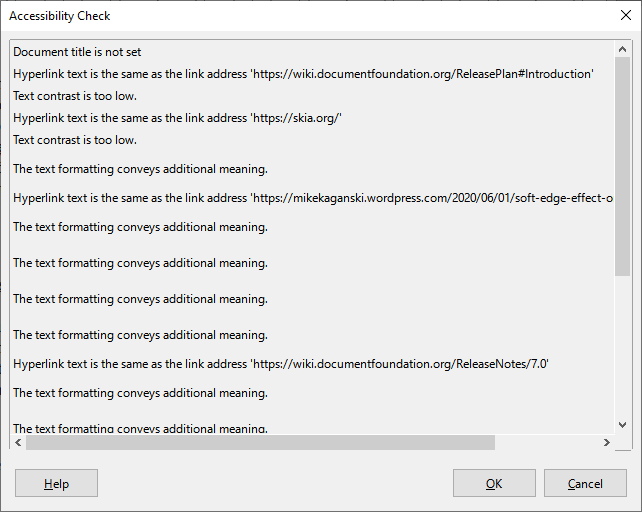 Accessibility is enhanced in this version with a new accessibility check tool in Writer which informed us of things like "text contrast is too low" and "no alt text for graphic image".

The tool looks basic but will no doubt be enhanced and added to other applications in future. There is also support for PDF/UA, a standard for accessibility in PDF documents.

LibreOffice 7.0 adds support for newer versions of the ODF (Open Document Format) standard, 1.3 and 1.3 extended. There is also a change to the DOCX (Office Open XML) export, which is now in the 2013 version rather than the 2007 version. This may cause problems for Word 2010 users, to whom the advice is to "upgrade to LibreOffice".

There are a bunch of other changes, many of them minor bugfixes. Thin perhaps for a major version release? True, but the improvements are useful. Some are happy typing into a web browser, but for countless businesses desktop office applications are still heavily used, and the existence of strong open-source alternatives to Microsoft's suite is valuable not only for saving money on licences, but also for "digital sovereignty", which remains an EU aspiration.

It is good to see the fit and finish of LibreOffice improving, though fonts and font display are still a weak point. Overall, though, this is excellent open-source software and 7.0 looks like another strong release. ®