Astronomers are on the hunt for a rare gigantic star located 75 million light years away that seems to have disappeared after nearly 20 years of observations.

Scientists, led by Trinity College in Dublin, Ireland, wanted to find out what happens during the final evolution stages of massive stars. They settled on what they believed was the perfect specimen: an unnamed massive dying star in the Kinman Dwarf galaxy.

Since 2001, the object, 2.5 million times brighter than our own Sun, has been picked up by astronomers and appeared likely to go supernova, possibly sooner rather than later. Yet when the Trinity team directed the European Southern Observatory’s (ESO) Very Large Telescope in the direction of the constellation of Aquarius, toward the dwarf galaxy, the star was nowhere to be found.

“Instead, we were surprised to find out that the star had disappeared,” said Andrew Allan, lead author of a paper describing the vanishing act, published in the Monthly Notices of the Royal Astronomical Society on Tuesday. “Our simulations predict that the star had a mass roughly between 85 and 120 times that of the Sun,” he said.

They believe there are two possible explanations behind the star’s disappearance. The boring answer is that, well, it has simply transformed into a dimmer star due to matter loss that’s causing it to be obscured by dust. Or, perhaps, the giant star has collapsed into a black hole without going supernova first, which sounds fantastic but isn't unknown. 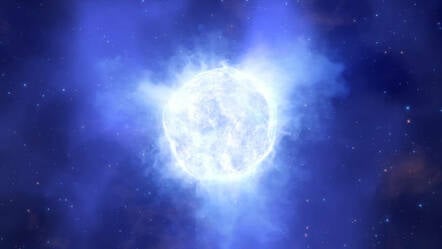 An illustration of what the luminous blue variable star in the Kinman Dwarf galaxy could have looked like before its mysterious disappearance ... Credit: ESO/L. Calçada

“Collapse to a black hole without producing a supernova has been observed once before, in the galaxy of NGC 6946 where a smaller massive star seemed to disappear without a bright supernova explosion,” he told The Register.

“The larger mass of the star we study as well as it being from a low metallicity galaxy makes the finding unique and could hold important clues as to how stars could collapse to a black hole without producing a bright supernova.”

It’s unclear how massive the star was. Models estimated that it was shedding 0.020 solar masses a year. Classified as a luminous blue variable (LBV), the object is an extremely rare type of supergiant star prone to strong eruptions of energy. Previous observations suggested the LBV had experienced one of its outbursts that ended in 2011. The latest explosion may have shed enough mass to weaken the star’s brightness or kickstarted its demise into a massive black hole.

The best way to check is to observe the location for infrared radiation. If it really is being shrouded by dust, its local environment will still emit heat. But if it’s a black hole, then scientists should look for its gravitational effects.

"Furthermore, ESO’s Extremely Large Telescope planned to begin operation in 2025 could also help us to understand how the star disappeared." ®