Bork!Bork!Bork! Today's addition to the encyclopaedia of borkage comes courtesy of some digital signage sat next to ticket machines in the fair city of Southampton, UK. 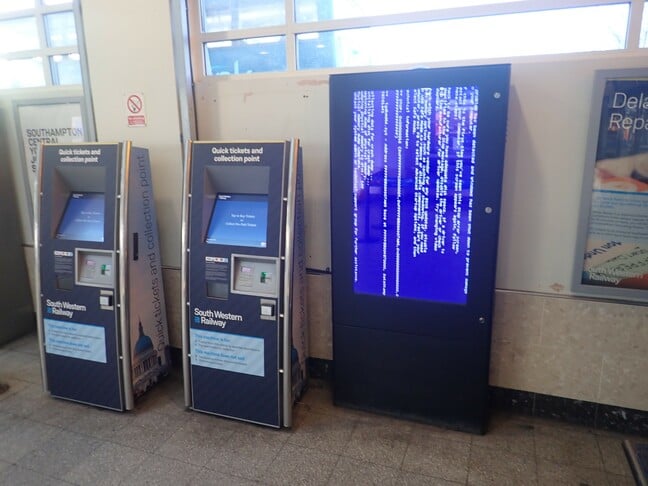 It is a return to form for our old friend, the blue screen of death (BSOD), although in sideways form. Either the screen is advertising the consequences of over reliance on the wares of Micros~1, or the STOP is down to something making igdkmd64.sys very poorly.

igdkmd64.sys looks to our untrained eye to be something to do with onboard Intel graphics. While some might quibble about full-fat Windows being overkill for digital signage, shoving Nvidia or AMD's finest behind the screen would seem a step too far for most. So Intel it is.

Something has certainly made the video driver choke. Windows, being Windows, has responded with all the stability of an elephant on an electric scooter.

Still, it did manage to at least complete a physical memory dump, even if passing passengers are unlikely to heed its pleadings for the attention of a system administrator or even that of a technical support desk.

Snapped by an eagle-eyed Register reader a couple of years ago, the surroundings look a little down at heel, despite Southampton's grand plans for redevelopment. The art-deco exterior is pleasant enough, although we were saddened to read that Gerry W reckoned it was "old fashioned and a bit tired looking."

Bob S stuck the knife in with: "There is no such thing as an amazing railway station."

Oh, Bob, how wrong you are. There are many temples to train travel in the world, and examples of architecture to set a traveller's heart soaring even as the latest delay is mumbled from the PA system.

Sadly, after this episode, we fear Southampton Central is not one of them. ®