Slower than an iPhone, faster than a 2019 MacBook Air: It's an iBook that's over a decade old

Column The modern always-on workplace isn't designed for everyone. And that's why a search for a coping strategy for dyspraxia* took me to eBay, where I bought an archaic Apple iBook for the princely sum of £40 (excluding shipping).

The goal was to have a dedicated writing workstation, where I could do my best work without any distractions. This early-2000's iBook fit the bill. With a sleepy 800mHz PowerPC G3 processor and 256MB of RAM, this machine is many factors slower than my iPhone. Although it comes with a built-in AirPort Wi-Fi card, modern wireless networks confound it. 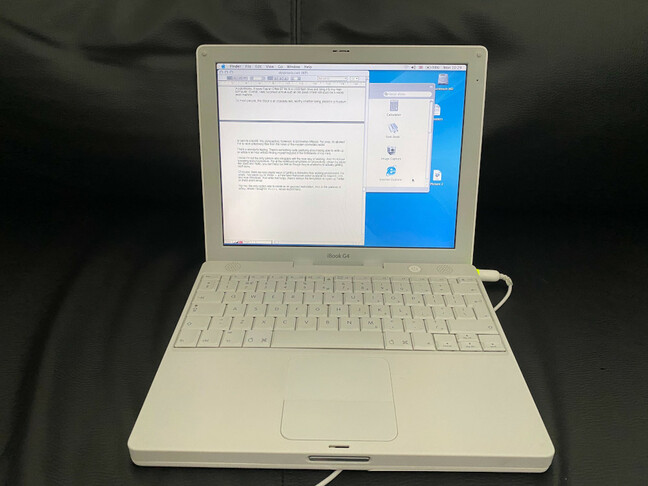 Despite coming with an ancient mechanical ATA hard drive, the laptop cold-boots in less than a minute. AppleWorks 6.0 opens almost immediately. It's weirdly nifty for something from an older era, often feeling more nimble than the 2019 MacBook Air that I otherwise work from. And the old-school Apple keyboard it includes is delightfully lovely to type on. It's spacious. Comfortable. Loud. And there's heaps of travel.

The absence of working Wi-Fi isn't a deal-breaker. Once I've finished working on some writing in AppleWorks, I'll save it as an Office 97 file to a USB flash drive and bring it to my main computer. Overall, I was surprised at how such an old piece of tech could still be a viable work machine.

To most people, this iBook is an obsolete relic, worthy of either being placed in a museum or sent to a landfill. My perspective, however, is somewhat different. For some, when they're in the zone, it's easy to find themselves plucked out. All it takes is an instant message or a phone call.

For once, this iBook has allowed me to work effectively free from the noise of the modern connected world. 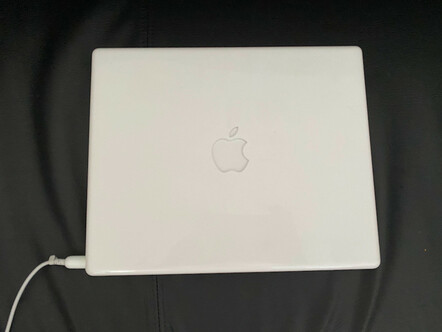 That's a beautiful feeling. There's something quite gratifying about being able to write something in an hour without finding yourself trapped in your mind's hinterlands.

I know I'm not the only person who struggles with the new way of working. And that's not just speaking about the condition of dyspraxia (see boxout below). For all the newfound emphasis on productivity, driven by apps like Slack and Trello, you can't help but feel as though they're anathema to actually getting stuff done.

There are, of course, less drastic ways of getting a distraction-free working environment. For one, I've used iA Writer — a minimalist markdown editor available for macOS, iOS, and now Windows. But while that helps, there's always the temptation to open up Twitter or check one's email.

For me, the only option was to create an air-gapped workstation. And, in the parlance of eBay, where I bought it: A++++, would recommend.

When I was four, my parents watched in concern as I struggled to fasten the velcro straps on my shoes, and repeatedly put my school uniform on back to front. When I got to class, my teachers noticed that some things didn't come to me straight away. My handwriting would start straight, but would quickly angle downwards, sharply veering to the bottom of the page in a 90˚ angle. A diagnosis of dyspraxia soon followed.

Dyspraxia — or developmental co-ordination disorder — is the little-known sibling of dyslexia and dyscalculia. Its calling card is an overall lack of physical co-ordination. Those with the condition often struggle with things that require fine motor control, like handwriting or playing sports. The condition also presents with neurological symptoms, such as poor concentration and time management.

You learn to work around those shortcomings. While it would be helpful for a writer to know shorthand, I manage just fine with a dictaphone. And despite living in Liverpool and coming from a die-hard Evertonian family, I couldn't care less about football. Some traits aren't hereditary, it seems.

It's hard to tell how many people suffer from it. Estimates put the prevalence in the population as high as 10 per cent, with males up to four times more likely to have it than females. However, given many of the symptoms can be dismissed as poor academic engagement, it's likely most with the condition go undiagnosed.

There's no cure. Early interventions can help, and I spent a lot of time in primary school working with an occupational therapist, learning how to trace the shape of letters with a plastic mould and a marble. Nonetheless, my handwriting remains completely illegible, putting even the most hurried of medical professionals to shame. And I'm still woeful at football. You wouldn't want me for your five-a-side team.