Curse us and crush us, my precious is lost

Bork!Bork!Bork! Welcome to another in The Register's series of public whoopsies by customer-facing IT. Today it is the turn of perennial favourite, British Airways.

The Register reader who received this particular from the former World's Favourite Airline has long forgotten his account credentials. British Airways, however, has not forgotten him and fired off an email exhorting him to use his, er, "false" Avios lest they expire. Heaven forbid that he have any true examples of the breed.

British Airways has been through a bit of a torrid time of late. Bedevilled by IT failures in recent years, and now with much of its fleet grounded, the airline (ranked 19th, between KLM and AirAsia according to 2019's World Airline Awards), is clinging to the hope that its customers might return in the coming months. 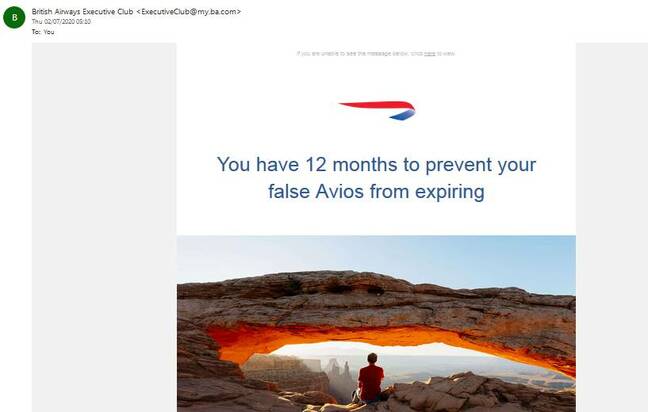 Indeed, we can barely wait. After an impressively hard landing caused bits of the interior of one of the company's elderly Boeing 747s to fall off on one of our flights, and condensation fun and games resulted in an impromptu waterfall on another, its Executive Club suffering from the curse of Bork is only to be expected.

We contacted the airline to find out what might have befallen the Avios system it uses to keep its punters loyal, and it took a break from devising new and exciting ways of upsetting its staff to tell us:

"A very small number of our Executive Club members received an email which included an error. We are investigating to ensure our members do not have any further issues."

As for the error itself, zero is often converted to "false" during some operations, so it might just be that BA has some difficult news for the recipient, but can't bring itself to say it directly. Alternatively, the code responsible for counting those miles has had a very bad day indeed.

Whatever the reason, we suspect it will be a while before our reader samples BA's finest (complete with its eye-wateringly expensive sandwiches and Speedbird-branded Brewdog beer.) False Avios or not.

While Borks are usually tinged with blue, we welcome all examples of the breed here at The Register. Send us an email with your sightings of the frequently spotted borkage in all its finery. ®