At a press conference on Tuesday, NASA confirmed why Boeing's CST-100 Starliner spaceship failed to hook up with the International Space Station last year. The answer: as expected, buggy code.

Crucially, NASA admitted it did not supervise Boeing closely enough during the craft's software development stage because the agency trusted the aerospace corp's seemingly "more traditional" engineering methods, and thought it had a good grasp on Boeing's processes. NASA thus focused its attention instead on assessing rival SpaceX's newer programming techniques.

Back in December, Boeing was tasked with sending a Starliner packed with cargo to Earth's orbiting science lab. This would have been a perfect opportunity for Boeing to demonstrate it was on track with the spacecraft, which it hopes will safely ferry humans into the heavens in the not-too-distant future. However, the flight was plagued with software glitches, and the Starliner ultimately failed to dock with the station. 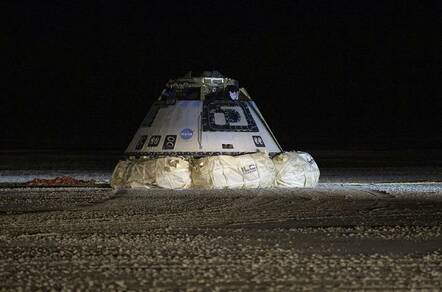 Boeing round the twist ... the CST-100 Starliner after it returned to Earth, where it remains grounded. Credit: NASA/Bill Ingalls

Ground control was able to bring Boeing’s calamity cargo ship back to Earth, and NASA launched a thorough investigation to figure out what went wrong. As a result of that probe, NASA and Boeing boffins have come up with a list of 80 recommendations to fix Starliner's glaring problems, Kathy Lueders, associate administrator of NASA’s Human Exploration and Operations Mission Directorate, said in a conference call with reporters.

A full report detailing these changes will not be publicly released, however, as it contains Boeing's proprietary information that could allegedly provide its competitors an unfair advantage. That's amusing given Boeing is far behind rival SpaceX, and its tech doesn't even work properly. Boeing and SpaceX were both contracted to run deliveries to the space station, and while Elon Musk's upstart has put two astronauts in orbit, Boeing is stuck in the doldrums. A redacted report has not been published yet, either.

Lueders admitted NASA was not as closely involved with the Starliner's software development stage as it could have been, leading to the deployment of poor code. This was partly because the agency thought it already had a solid handle on Boeing's development processes.

“Perhaps we didn’t have as many people embedded in that process as we should have,” she said. Instead, NASA focused on areas it deemed “higher risk,” particularly those involving the safety of the crew.

“The strategy was because we’re buying a service, NASA did not have a requirement to have a systems engineering management plan," she said. "If we had understood what that structure was, we would have been better able to plug into the decision-making process. In particular, how they were integrating software and hardware pieces together. We thought we understood it, but over time we realized it had changed."

You might think the Starliner mishap dented Boeing’s standing, yet NASA isn’t giving up on the aerospace company. Steve Stich, manager of NASA’s Commercial Crew Program, said the American agency expected to launch a new and improved Starliner in the “latter part of the year.”

He couldn’t speculate on the launch date, and said NASA and Boeing eggheads are still making the necessary changes to Boeing’s flight software. “Once we see how that shapes out, we’ll talk about when to go fly,” Stich said.

Boeing’s approach to writing and testing software in its Starliner was described as being “more traditional” than SpaceX’s programming techniques for its crewed Dragon pod. For that reason, NASA staff monitored SpaceX's coders more closely than Boeing's. “When one provider has a newer approach than the other, it's natural for human beings to focus more on that one,” Stich said.

SpaceX successfully sent astronauts off to the space station in its Dragon capsule atop its own Falcon 9 rocket in May. Stich said NASA’s working relationship with both companies was still very solid despite Boeing’s blunders.

“From my perspective, every early space company goes through these anomalies and you learn from it," he said. "These kinds of things disappear. Every time they work to become better... I can’t envision a future where SpaceX is the only provider. We need Boeing and SpaceX to be both be there for us." ®