A rogue white dwarf star hurtling through the Milky Way may have freed itself from a binary system after it partially exploded as a supernova more than 40 million years ago.

The star, snappily code-named SDSS J1240+6710, was discovered in 2015, and has odd properties scientists couldn’t initially explain. Unlike typical white dwarfs, it contains no hydrogen or helium. Instead, its atmosphere is made up of oxygen, neon, magnesium and silicon – elements forged in thermonuclear reactions produced in a supernova.

To top it all off, the star is streaking through our galaxy at 900,000 KPH (559,234 MPH). Now, scientists led by the University of Warwick in England believe they have solved the mystery of why the star has such peculiar properties. 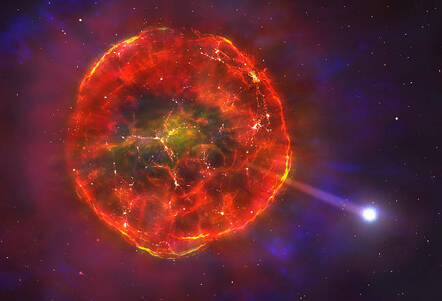 Hell of a trick shot ... An illustration of the white dwarf escaping the partial supernova. Credit: University of Warwick/Mark Garlick

“We tentatively suggest that SDSS J1240+6710 is the partially burned remnant of a low-mass white dwarf that underwent a thermonuclear event,” they wrote in a paper published in the Monthly Notices of the Royal Astronomical Society.

They reckon the star blew itself out of its stable orbit with another solar body when their merger turned into a failed supernova. The team speculates that the resulting explosion, while a bit of a fizzle, was enough to hurl the two objects apart at high speed.

Boris Gaensicke, lead author of the study and a physics professor at Warwick, told The Register the star’s chemical composition provides vital clues to its violent past.

“We can tell that it [went supernova] from the typical fingerprint of elements produced by nuclear fusion in a supernova, though it did stop short of burning silicon into nickel and iron, which a full-fledged supernova does," said Professor Gaensicke. "[That] usually destroys the star entirely in the process.”

In other words, SDSS J1240+6710 is the leftover remnant of a failed supernova explosion. It’s about 1,400 light years away, he said, and will keep traveling through the galaxy alone, until it eventually uses up the rest of its fuel and dies.

“It will slowly cool, and gravity will, with time, pull the heavier elements down to layers where we can't see them anymore, with the lightest element floating to the surface - so it may end up having an atmosphere composed of carbon and maybe oxygen,” he added. It’s unknown if its companion survived the initial blast.

Prof Gaensicke believes the star is proof that there may be different types of supernova that astronomers haven’t yet classified.

“We are now discovering that there are different types of white dwarf that survive supernovae under different conditions and using the compositions, masses and velocities that they have, we can figure out what type of supernova they have undergone," he said.

"There is clearly a whole zoo out there. Studying the survivors of supernovae in our Milky Way will help us to understand the myriads of supernovae that we see going off in other galaxies." ®