ESA and NASA's Solar Orbiter probe has sent back images showing omnipresent miniature solar flares near the surface of the Sun, dubbed "campfires" by astroboffins.

Those remembering lava-like marshmallows, singed eyebrows, midges and dispiriting tent-based holidays will need to think bigger; these "campfires" were snapped in June from a distance of just over 77 million kilometres (about half the distance between the Earth and Sun) as the UK-built spacecraft completed the early part of its technical verification.

The campfires were captured by the Extreme Ultraviolet Imager (EUI). David Berghmans of the Royal Observatory of Belgium, Principal Investigator of the instrument, said: "The campfires are little relatives of the solar flares that we can observe from Earth, millions or billions times smaller."

Scientists do enjoy a mystery and are pondering if the campfires are tiny versions of the bigger flares solar scientists are familiar with or are driven differently. Some theorise that these little flares might contribute to the coronal heating of the Sun.

The solar corona extends millions of kilometres from the Sun's surface and, at over a million degrees Celsius (1,800,032°F), is considerably hotter than the relatively cool 5,500°C (9,932°F) of the surface. Scientists are unsure of the processes at work, "but identifying them is considered the 'holy grail' of solar physics," according to ESA. 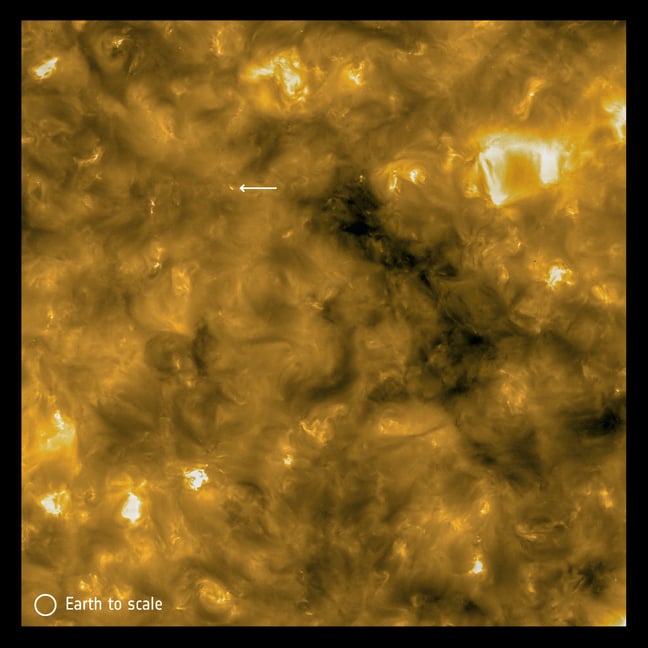 Scientists hope to solve at least some of the Sun's mysteries by combining the results of the Solar Orbiter's instruments, which include six remote-sensing instruments to image the Sun and its surroundings, and four in-situ instruments to monitor the environment around the spacecraft.

Launched on 10 February, the space agencies are rightly proud of the spacecraft as ESA noted: "The unique aspect of the Solar Orbiter mission is that no other spacecraft has been able to take images of the Sun's surface from a closer distance."

In the coming years, the probe's trajectory will take it ever closer to the Sun. "Ultimately, it will get as close as 42 million km, which is almost a quarter of the distance from Sun to Earth," said Daniel Müller, ESA's Solar Orbiter Project Scientist.

As well as some spectacular images of the Sun, scientists also hope to gain insights into the generation of solar wind.

The data will also be combined with that returned by NASA's Parker Solar Probe, which came to approximately 11.6 million miles of the Sun's surface during its fifth encounter in June.

"We didn't really expect such great results right from the start," gushed Müller.

As well as being built in the UK, the Solar Orbiter benefits from an international payload. The mission was described by UK science minister Amanda Sollaway as "one of the UK's most important space ventures for a generation."

Sollaway later struck a hopeful note and said: "I hope it will be one of many in the years to come." ®