For the first time in eight years, Twitter plans to introduce a major revision to its API that describes how developers can access the platform's data.

In doing so, the shouty social network is making yet another attempt to stabilize its development platform and earn the trust of individual, academic, and corporate coders whose software might just make the company more valuable.

Twitter's data licensing revenue – drawn mostly from selling bulk data access to partners and corporate customers for tweet analysis – reached $125.4m in Q1 2020 (PDF), or about 15 per cent of its $808m revenue that quarter. While most of the company's income comes from selling ads, data licensing revenue, up 17 per cent year-over-year, is growing faster than ad revenue.

During a media briefing about the API revision on Tuesday, Ian Cairns, product lead for the Twitter API, emphasized the importance that developers have played in the evolution of Twitter since the biz first made v1 of its API available in 2006.

He also acknowledged how the company's frequent platform policy and technical changes had complicated relations with third-party developers.

"We've made some mistakes, and learned along the way," he said.

CEO Jack Dorsey said as much in October 2015, back when Twitter held developer conferences. He promised a reboot of the company's relationship with developers, which really went south after v1.1 of the API was announced in 2012.

And yet in 2017, Twitter sold its Fabric platform for mobile development to Google, tossing a set of tools it had pitched to developers. And two years ago, the company's decision to discontinue its streaming API further inconvenienced various third-party apps that relied on it. The basic problem is that API changes made without sufficient warning and developer consultation can break apps and harm businesses that depend on them.

Signs of a turnaround appeared last year with Twitter Developer Labs, a resource intended to provide developers with early access to technical information and APIs.

With the arrival of Twitter API v2 on Thursday, perhaps things will be different. Priyanka Shetty, product lead at Twitter, explained that developers have told the company that they want flexibility, parity, and clarity.

Flexibility and clarity represent obvious asks. Parity in this case means that devs have't been thrilled with the three-tiered scheme that includes the standard Twitter API, the premium API rolled out in 2018, and enterprise API that came out of the company's 2014 Gnip acquisition.

Twitter's three distinct APIs will eventually be phased out in favor of the single rebuilt v2 API with multiple product tracks (Standard, Academic Research, and Business), each provisioned for one of three possible access levels (Basic, Elevated, and Custom). Pricing hasn't been disclosed but Standard Basic access will be free. 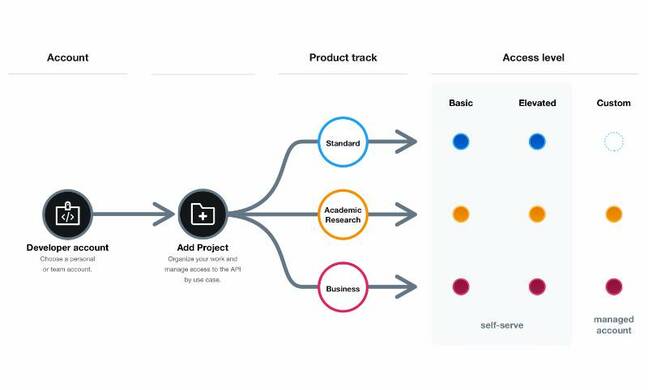 Since the API renovation isn't finished yet, Twitter is offering early access to a handful of new APIs endpoints that allow devs to stream tweets in real time, analyze past conversations, measure tweet performance, and interact with the service programmatically in ways not previously possible.

These revised API endpoints are all available under the Standard track, with Basic access. They touch on various aspects of the social network's data:

A roadmap has been laid out to help developers understand Twitter's development timeline. Twitter had also planned to share more details in other developer-oriented posts but decided to delay publication due to the major security incident on Wednesday. We're told there's no evidence so far that the account hijackings, said to have been a coordinated social engineering attack to gain access to internal tools, had anything to do with the API.

The Twitter API v2 is also intended to better serve academic researchers, who sometimes resorted to scraping data because they couldn't afford the cost of the enterprise API.

Cairns said the Twitter API provides a way for developers to make the social network better for its users. As an example, he suggested that developers may wish to build tools to help users who receive a lot of hateful replies to their tweets via the hide replies capability introduced last year. Doing so manually would involve reviewing each insult individually, so a programmatic tool for burying vitriol might be a worthwhile project.

"Our hope with making the API available is that developers can build tools to do this," said Cairns.

Twitter, of course, could undertake such a project itself and make it a standard feature. But the biz wants to leave such things to outside developers so it can focus on the core service. ®