It is 45 years since US astronauts and Soviet cosmonauts first shook hands in space. The Register presents "When Apollo met Soyuz".

Conceived during an all-too-brief warming in relations between the US and the Soviet Union, the mission (known as the Apollo-Soyuz Test Project – ASTP – in the US, and Soyuz-Apollo Experimental Flight – EPAS – in Russia) was the culmination of discussions around a joint spaceflight that included a potential joint mission to the Moon.

As the 1970s rolled around, thoughts turned instead to having a Soyuz visit the US Skylab space station for a joint mission. Such an endeavour would need tweaks to the docking hardware; the Apollo approach was incompatible with the Soyuz so would require adaptations to make it work. Other suggestions were to have the Soviets dock with an uncrewed Skylab or an Apollo station-keep with Skylab while a Soyuz made its approach.

The launch of Salyut 1, Russia's own space station, ahead of Skylab, switched things around and discussions were had regarding sending an Apollo spacecraft to the new Soviet outpost. A docking module would deal with the difference in atmosphere between the spacecraft. Sadly, the Soyuz 11 accident put paid to such dreams (along with a decline in desire for such a mission).

The final mission profile, to be flown in 1975, ended up consisting of Apollo and Soyuz spacecraft, replete with docking module, meeting in orbit. Docked operations would continue for two days, during which time the crews could visit each other's spacecraft before undocking and returning to Earth.

The docking module was to be retrieved from the S-IVB stage of the Saturn IB launch vehicle by the Apollo spacecraft, in the same way as earlier missions had extracted the Apollo Lunar Module (LM). One end would use the probe and drogue mechanism used both for the LM and Skylab. The other end of the docking module featured an adapter for the Androgynous Peripheral Assembly System (APAS) to be used by the Soyuz.

The docking module would also deal with the differences in atmosphere and pressure between the Soyuz and US spacecraft; Apollo used pure oxygen at five pounds per square inch and the Soyuz used a nitrogen/oxygen mix at sea-level pressure.

It was to be the last hurrah for the Apollo programme, six years after successfully landing a crew on the Moon.

The crew of the last Apollo capsule consisted of the veteran Thomas Stafford, making his fourth and final flight, Vance Brand, who would go on to fly on three Space Shuttle missions, and Deke Slayton.

One of the original Mercury 7 astronauts, Slayton had been grounded in 1962 due to an irregular heart rhythm. He became Chief of the Astronaut Office before being cleared to fly in 1972. With the Skylab slots filled, ASTP was Slayton's last chance to fly an Apollo spacecraft.

Since there would be no lunar module, Slayton was assigned the title "Docking Module Pilot". Stafford was Commander, and Brand the Command Module Pilot.

While Slayton would be responsible for the Docking Module, there would also be some free-flying. In the book Deke!, Slayton recalled: "I spent a lot of time in the simulator training to fly the command module. I'd be damned if I was going to wait all these years to get into space and then not have a chance to actually fly the spacecraft."

The Americans found learning Russian tricky ("the language stuff was a real bear," observed Slayton) but were spurred on by how quickly their Soviet counterparts were picking up English. The trio also spent time in the Soviet Union, staying at The Hotel Cosmonaut, according to Slayton. "The walls had ears," he recalled, and the Americans tested it by complaining loudly about the lack of a pool table. The next day one turned up in the bar that had been built for them.

The Soviet crew consisted of first spacewalker Alexei Leonov (making his final spaceflight) and Valeri Kubasov, who would go on to visit the Salyut 6 space station. Leonov recalled that the mistrust of the other country's intelligence services was mutual, writing in the book Two Sides of the Moon: "The first time I visited the United States I used to clap my hands loudly every time I entered my hotel room at night: 'Attention please,' I'd say for the benefit of those I believed to be bugging my room. 'Let's go.'" 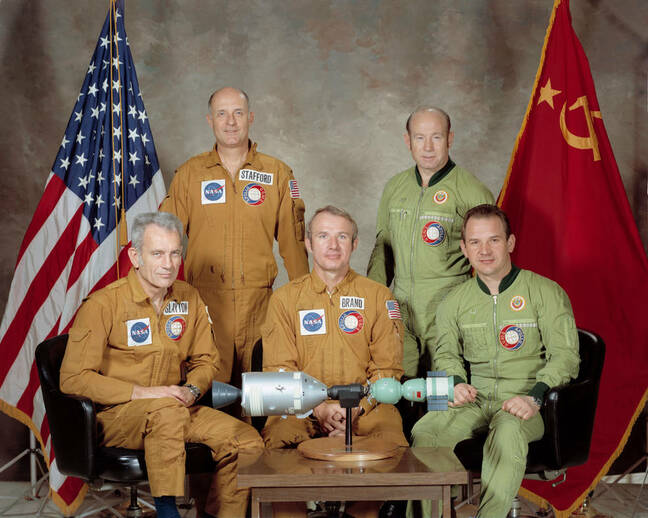 While the respective governments may have been less than the best of pals by the time the mission launched, the crews got on well. Leonov and Stafford became good friends and the Soviet spacewalker felt a particular affinity with Slayton, who had endured a decade of frustration while his contemporaries flew in space and walked on the Moon.

The launches went ahead on 15 July, within hours of each other. The Soyuz went first. A backup Soyuz was available in the event of a scrub on the US side but, other than an issue with an umbilical, the Apollo launched without issue. Slayton's heart history had continued to worry the flight surgeons (although Stafford kept it from him until after the mission) and issues on earlier Soyuz missions had made some in the US a little jittery, but the mission proceeded as planned.

The docking module was extracted and the two spacecraft began their chase, eventually docking on 17 July.

Slayton recalled an odour a little like burnt glue as the Apollo crew opened the hatch to the docking module through which he and Stafford were to make the first visit. Famously, Leonov had a surprise for his American counterparts, telling Slayton and Stafford "we must drink to our mission" and handing the duo a tube each, labelled with Russian vodka brands.

Stafford looked nervously at the TV cameras before Leonov said: "I'll show you how its done," and squeezed the contents of one of the tubes into his mouth. Stafford followed suit, and Leonov recalled his reaction: "'Why it's borscht!' he said, eyes wide and slightly disappointed."

Leonov, a keen artist, also presented sketches he had made of the American trio and the crews exchanged gifts, including tree seeds.

After nearly two days of joint operations, the spacecraft were to undock, perform additional rendezvous manoeuvres, and then dock once more, this time with Slayton at the controls. The plan was for the Apollo to create an eclipse, as seen from the Soyuz, for a solar experiment. "Then I did a manual redock... which went pretty well," recalled Slayton, "though I was getting blinded by the sun for the last few feet."

"I also tweaked the hand controller the wrong way, once we had captured Soyuz again," he admitted, "causing the two spacecraft to shake a little."

Leonov remembered things a little differently. According to him, Slayton's error had the effect of pushing both vehicles off centre, "folding them towards each other".

"There was a real threat of damaging the joint docking mechanism and the possibility of a catastrophic depressurisation of our orbital module."

Fortunately, no harm was done, although Leonov recalled an apology being received from Mission Control in Houston. "We never spoke about it," he said, and the incident was treated as "an internal affair".

"It would not have been very diplomatic for us to reveal how close Apollo had come to crippling Soyuz."

The Russian mission ended with a successful landing on 21 July while the US Apollo capsule splashed down on 24 July. For the trio of Americans, the mission almost ended in disaster as the spacecraft's Reaction Control System (RCS) was accidentally left on during the descent, and toxic fumes were sucked into the capsule.

"Suddenly we had a cockpit full of yellow gas," recalled Slayton, "we were all hacking and coughing by the time we hit the water."

Worse was to come. The crew were trapped in the capsule as it bobbed on the water and, as divers peered in the window to check on the crew, "like a dumb shit I gave him the thumbs-up," remembered Slayton. Getting the crew out was therefore not a priority for the recovery team.

It was a close thing. "A lethal dose of that gas was four hundred parts per million," recalled Slayton. "They [the doctors] estimated we had inhaled it at three hundred."

RIP: First space-walk badass Alexei Leonov, who made it to 85 despite best efforts of Soviet machine

The mission itself laid the groundwork for future cooperation between the two nations, culminating with the Shuttle-Mir missions and the International Space Station (ISS), although it would be many years before such a high-profile example of cooperation in space would occur again.

A heavily modified version of the APAS docking system developed for Apollo-Soyuz continues to be used on the ISS today.

Slayton would never fly again but went on to play a part in the Space Shuttle programme, eventually departing NASA in 1982. He died in 1993. Leonov had a hand in the ill-fated Buran programme but would not get the opportunity to fly in space again. Buran itself made one uncrewed flight before it was eventually wound up. Leonov died in 2019.

The books Two Sides of the Moon by Alexei Leonov and David Scott was an invaluable resource, as was Deke! by Deke Slayton and Michael Cassutt. Star Crossed Orbits by James Oberg is recommended for an insight into Russian and US cooperation in space during the era and Soyuz: A Universal Spacecraft by Rex Hall and David Shayler is well worth a read. ®