High-energy X-rays emanating from a gigantic black hole rapidly petered out before it roared back to life again, leaving astronomers bewildered.

An international team of scientists have been observing the hole, 1ES 1927+654, for years. It’s estimated to be roughly 19 million solar masses, and is classified as an active galactic nucleus (AGN), which is a particularly bright type of supermassive black hole.

They also observed its corona, which is a ring of hot, energetic particles that reach a billion degrees and is about 100 million light years from Earth. It encircles the hole's event horizon.

The boffins lately realized the ring's brightness was dimming far faster than thought possible, plummeting by a factor of 10,000 in just a year to a low by July 2018. 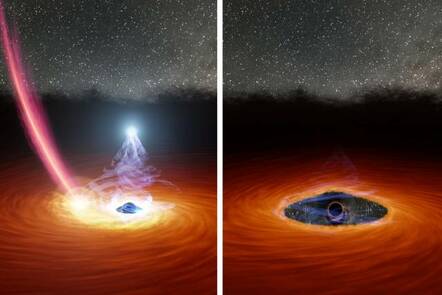 Now you see me, now you don't ... An illustration of the black hole losing its corona after a star wanders too close. Image credit: NASA/JPL-Caltech

“We expect that luminosity changes this big should vary on timescales of many thousands to millions of years,” said Erin Kara, co-author of a study into the hole just published in The Astrophysical Journal, and an assistant professor of physics at MIT.

“But in this object, we saw it change by 10,000 over a year, and it even changed by a factor of 100 in eight hours, which is just totally unheard of and really mind-boggling.”

X-ray telescopes, such as NASA’s Neutron star Interior Composition Explorer (NICER) onboard the International Space Station, and ESA’s XMM-Newton Observatory, were pointed at the hole and detected less and less light from the corona. The ring appeared to have virtually disappeared at one point, something scientists have never seen happening before with black holes.

The surprises didn’t stop there. After 1ES 1927+654’s corona went dark, the black hole began collecting nearby material to repair its inner accretion disk. In just a couple of months, its corona returned and appeared almost as bright as before.

“This seems to be the first time we’ve ever seen a corona first of all disappear, but then also rebuild itself, and we’re watching this in real-time,” Kara said. “This will be really important to understanding how a black hole’s corona is heated and powered in the first place.”

The astronomers aren’t quite sure what caused the black hole to blink. They believe that a star may have ventured too close to the black hole's event horizon and was pulled apart. The leftover pieces bounced around "like a pebble tossed into a gearbox" and disrupted the black hole’s accretion disk.

“My best guess is that a star got too close to that supermassive black hole, and because of the strong gravitational field of the black hole, the star got ripped apart,” Kara told The Register this week. "That stellar debris was on a collision course with the black hole accretion disk, and when it collided, the inner disk was disturbed, causing all that disk material and the corona to plunge into the black hole."

Scientists know what coronas are made up of yet they don’t really know how they’re formed. Kara hopes that black hole’s odd behavior might shed light on the process, adding: “The funny thing is, we don’t know what creates a corona around any black hole. How are those electrons so hot in the first place?

“The fact that we are watching one build up, nearly from scratch, almost back to its normal luminosity is a really big deal.