Cisco watchers may recall that the company is infamous for two particularly odd bug reports.

The other points out that “Certain types of snagless Ethernet cables have protective boots that extend too far forward and above the plastic latching tab.”

Which is a problem because: “When this type of cable is installed in Port 1 of any 48-port model of the Cisco Catalyst C3650 or C3850 Series switches, the boot might press and hold the Mode button, which invokes Express Setup and reboots the system.”

Or in other words, putting an ethernet cable into a switch can put that router into an endless spiral of FAIL. Which is a less-than-optimal situation given that the whole point of a switch is to have cables plugged into it.

Imagine your humble hack’s surprise, then, when a Cisco Notifications Alert arrived over the weekend titled “Protective Boot on Certain Network Cables Might Push the Mode Button and Cause an Unexpected Reset on the 48-Port Models of Cisco Catalyst 3650 and 3850 Series Switches”.

Had Cisco managed to make the same mistake twice? Or made an even sillier mistake?

The situation is even weirder: the Field Notice in question notes that it was first posted on November 11th, 2013, then updated when Cisco introduced a new Field Notice system in October 2017.

The reason for this weekend’s update?

“Fixed Broken Image Links” is all Cisco offers as the reason.

So here’s one of those iconic images. 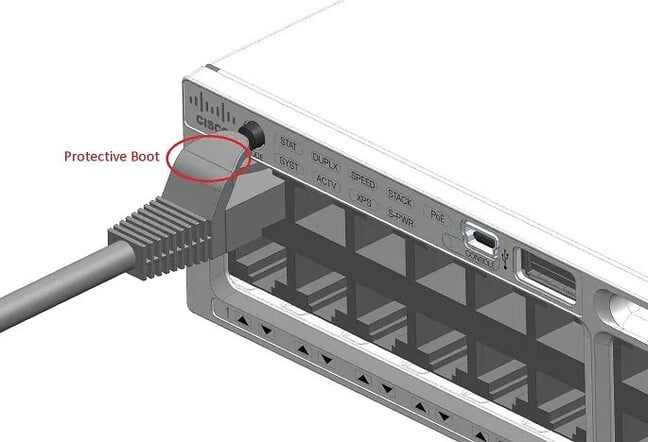 If you know of stranger bug notices than the ones mentioned here, feel free to mail me a link and we’ll try to have some fun with it! ®