Here, have a link to something vaguely related

+Comment Faced with an obvious falsehood pushed on its platform by a politician seeking re-election, Facebook has finally taken action... in the most grudging, useless way imaginable.

On Tuesday, Donald Trump, for it was him, again, posted the message, “Mail-In Voting, unless changed by the courts, will lead to the most CORRUPT ELECTION in our Nation’s History! #RIGGEDELECTION,” on the antisocial network.

The last time Trump made a false statement on this topic, Twitter appended a hyperlinked message to the bottom of the President's tweet that read, “Get the facts about mail-in ballots,” alongside an exclamation mark in a circle.

If users tapped or clicked on the alert, they were taken to a page hosted by Twitter that read at the top: “Trump falsely claimed that mail-in ballots would lead to ‘a Rigged Election.’ However, fact-checkers say there is no evidence that mail-in ballots are linked to voter fraud.” And then the page included a collection of tweets and news articles that debunked the Trump statement.

The decision by Twitter to intervene in this way caused some argument among supporters of President Trump, though it was largely seen as a fair way to both respect free speech while flagging up false claims.

Who says? Oh, our own audit

Earlier this month, Facebook was hit with yet more and this time formal criticism for its inability to fact-check the President – something even Twitter could handle. This criticism was contained in Facebook's own official civil-rights audit, the authors of which concluded that not only should Facebook have flagged up the President's previous nonsense, just like Twitter had done, but that Facebook had broken its own policies by not acting and that its justification for leaving Trump's posts alone was incoherent.

Which leads us to today’s statement by the President, for which Facebook took a different approach than it normally takes for Trump's outbursts. Facebook appended a message underneath the post, much like Twitter’s approach, albeit with some critical differences. 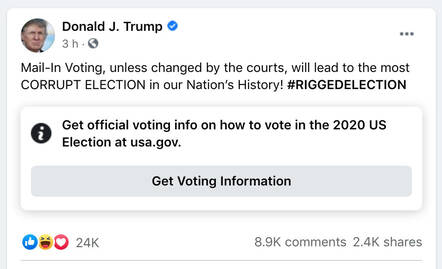 For one, the exclamation mark, implying urgency or warning, was replaced with an informational “i” in a circle on Facebook. The written message is, like Twitter’s, neutral but, again, significantly less urgent and less specific. Rather than “Get the facts about mail-in ballots”, it reads: “Get official voting info on how to vote in the 2020 US Election at usa.gov.” The message does not address mail-in ballots – the target of Trump’s false message – but mentions voting more broadly.

And lastly, and more significantly, the link leads to a generic webpage on a US government website that talks about mail-in voting, rather than a specific page hosted by Facebook to counter the misinformation. That page contains general information, and nothing that addresses the false claims made about mail-in ballots. There is no reference to the President's post that drove people there, and no critique nor restatement of facts.

In other words, it is the most feeble, half-hearted effort that Facebook could possibly have made in response to determined lying over a critical election made by a sitting President. Which is Mark Zuckerberg's Facebook all over.

While here, it may be worth quickly looking at why the actual President of the United States would post a knowingly false statement about mail-in ballots.

It shouldn’t really matter but the answer is because the Republican Party, of which Trump is currently a member, has undertaken a concerted, focused and long-running campaign to make it harder for groups that overwhelmingly vote for the rival Democratic Party to take part in America's elections. Most of the most successful efforts revolve around people physically turning up at polling stations – and either not having the required identification or paperwork, or having to wait in line for hours on end.

Mail-in ballots, however, effectively bypass those voter suppression efforts. And due to the nature of American politics, who becomes President and who wields power in Congress is often the result of a few small counties in a few key states. Anything that suppresses voting in key battlegrounds can have a disproportionate impact on the larger national picture.

With the coronavirus pandemic sweeping the country, however, mail-in ballots may be a practical necessity to allow Americans to vote in the election, and it is believed that that shift could well result in a higher turnout that usual, with the Democratic Party and the Democratic presidential candidates, Joe Biden, being the main beneficiaries.

Or, put more simply, mail-in ballots mean President Trump loses the election. Hence his determined efforts to undermine them. So when he does lose, he will be able to claim that it was in a corrupt and rigged election.

And why is that so important to the President that he would be willing to undermine his authority and have social media companies flag his posts as containing false information? Well, according to his niece, 55-year-old clinical psychologist Mary Trump, who has just published a book about Donald Trump and their shared family, it is thanks to a combination of him being desperately insecure and unscrupulous.

“Donald is not simply weak, his ego is a fragile thing that must be bolstered every moment because he knows deep down that he is nothing of what he claims to be. He knows he has never been loved,” she wrote, adding that “he can never escape the fact that he is and always will be a terrified little boy.” ®