The volcanoes on Venus, thought to have been long extinct, are actually still alive, at least in some cases, and are just having a quiet spell before reshaping the planet's surface once again. That's according to a paper published in Nature Geoscience on Monday.

Venus’ surface is peppered with thousands of volcanoes that are difficult to see beneath its thick clouds of sulfuric acid. As a result, scientists look for its distinctive coronae – rings formed from hot plumes of liquid bursting from below the surface, an indication that convection is occurring below the planet's mantle and the presence of an active volcano.

Academics at ETH Zurich, Switzerland, and the University of Maryland, United States, believe at least 37 volcanoes have been active as recently as two or three million years ago, a blink of an eye in geological terms. They studied Venus’ coronae using a mix of computer simulations and real data taken by NASA’s Magellan spacecraft that was in operation from 1989 to 1994. 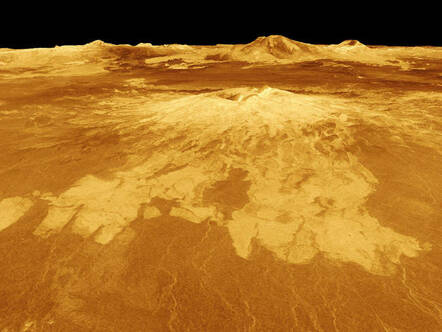 “We considered the generation of magmas, the way that the lithosphere can break and form faults, how magma can help faulting, and how minerals change when they are exposed to different pressures and temperatures inside the planet,” Laurent Montesi, co-author of the study and a professor of geology at The University of Maryland, explained to The Register.

They discovered that active coronae have subtle differences to ones that are defunct, allowing them to be identified. “All coronae look like a giant ring at the surface of the planet," he said. "What is special about the active ones is that there is a deep trench right outside the ring. Our models show that the trench vanishes quickly when the underlying plume becomes inactive.”

The team analyzed real images of more than 100 coronae mapped out by Megallan, and discovered 37 of them appear to have the trench-like features that signifies these volcanoes must have been active relatively recently. Montesi reckons the models are detailed enough to provide convincing evidence that Venus may still be geologically active. Not all of its volcanoes are dead; they’re just dormant at the moment, he said.

“It would be great to get back to Venus with instruments that would be able to see where the surface changes, both in elevation and in brightness, to test whether or not there has been activity in the coronae we studied. Hopefully, the EnVision and VERITAS missions will be selected. They should be able to return the necessary data, but not before the 2030s, unfortunately."

EnVision is a Venus orbiter proposed by the European Space Agency, and VERITAS is a NASA spacecraft that would map the planet’s surface in high resolution, and is under consideration. ®