Mexican cave relics suggest humans were populating the Americas up to 17,000 years earlier than thought

Humans are likely to have occupied the Americas from 30,000 years ago, which is much earlier than previously thought.

Stone tool found above the Last Glacial Maximum (LGM) layer, within Stratigraphic Component B. This particular piece was made from a greenish crystallized limestone. Credit: Ciprian Ardelean

Excavations in Chiquihuite Cave in northern Mexico by Professor Ciprian Ardelean of Universidad Autónoma de Zacatecas and colleagues show evidence of humans on the land from at least around 26,500 years ago.

"This Mexican site now joins half a dozen other documented archaeological sites in northeast and central Brazil that have yielded evidence suggesting dates for human occupation between 20,000 and 30,000 years ago," said an accompanying article by Ruth Gruhn, professor at the University of Alberta.

Meanwhile, radiocarbon dating of early archaeological sites by Lorena Becerra-Valdivia and colleagues reveals that interior regions of Alaska, Yukon in Canada and the continental United States were already widely populated more than 13,000 years ago.

The studies - "Evidence of human occupation in Mexico around the Last Glacial Maximum" and "The timing and effect of the earliest human arrivals in North America" - both published in Nature today, shed light on the hotly debated topic of the first human migration to the great American landmass.

"[They] report evidence that the initial human settlement of the American continent happened earlier than is widely accepted, and some of this evidence suggests that expansion into the continent began at least 10,000 years earlier than was generally suspected," Gruhn said.

For those interested in the peopling of the Americas, 13,000 years ago is a crucial date. It sets the start of the Clovis culture, named for the flint spearheads found in the 1930s at a site in Clovis, New Mexico. Its people were thought to have migrated across a land bridge where the Bering Strait is now, and down an inland ice-free corridor towards the end of the last Ice Age. The "Clovis-first" idea is still popular and went largely unchallenged until the 1970s.

"The Clovis-first model must be discarded," Gruhn said of the new findings.

The most recent findings from Mexico's Chiquihuite Cave may be new, but the discoveries were a long time in the making. Speaking to The Register, Professor Ardelean explained that clues were unearthed from the deepest strata after the first test excavation in 2012.

"I was shocked and very sceptical and careful," he said.

Years searching for more funding eventually led to further excavations in 2016 and 2017. Then the team got samples of bone, charcoal and sediment to Oxford Radiocarbon Accelerator Unit for accelerated mass spectrometry, and the results became clearer.

"When Oxford got involved and the first dates from all strata started to come in the summer of 2016, I opened a bottle of Macallan [whisky]," Ardelean said.

He said his team's discoveries complement and confirm the current mix of pre-Clovis sites in North and South America, providing evidence of human presence on the continent as old as 26,500 years ago and possibly even to 30,000 years ago. 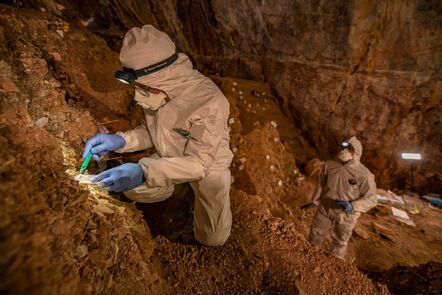 Assistant professor Mikkel Winther Pedersen from the University of Copenhagen sampling the cave sediments for DNA. Credit: Devlin A Gandy

The discoveries also suggest a great diversity in culture and technologies, he said. "That is what always happens when we find pre-Clovis sites; their artefacts never look the same. We are adding to the vast cultural diversity and provide new arguments that humans were here at least since the beginning of the last glacial maximum (LGM, between 26,500 and 20,000 years ago)," he said.

The findings could draw attention to very early sites in the US, Brazil, and Canada that are being ignored. "Personally, I think that once you have people here as early as the very start of the LGM, that can only mean that they had arrived long before that, before the closure of the giant ice sheets over Canada," said Ardelean. "Also, we must consider multiple migrations, from more than one direction, and a rich cultural (and ethnic) diversity, including many groups that vanished, went extinct."

A rethink of other ideas surrounding pre-historic human migration is also due. These include the notion that the extinction of megafauna, which in the Americas included woolly mammoths and mastodons, followed humans around the world. The popular theory is still espoused today and is put forward in Yuval Noah Harari's pop-science smash Sapiens, a favourite of none other than Bill Gates.

"The 'overkill theory' was closely linked to the assumption that humans were only 13,000 years old on the [American] continent," said Ardelean. "It's not a main part of the current academic thinking anymore. At the very end of the Pleistocene, around 12,000 years ago, humans may have given a blow to an already weakened megafauna, affected by the climate change. Our data does not provide any evidence to these aspects of the ancient life. Also, our people at Chiquihuite lived in a time much older than the megafauna extinction."

He said further analysis of the Chiquihuite samples would lead to a second paper about the site and that he hoped to extend the search in other caves and other regions. ®

Job ad says software is lousy at this task and it needs a human to do the job!

Roundup Plus: We'll see you at, er, NIPS next week!

World's OLDEST human DNA found in leg bone – but that's not the only boning going on...