Pic and video Astronomers say they have snapped a multi-planetary system containing a Sun-like star for the first time.

“A nice comparison is a tiny firefly that you want to image right next to a giant lighthouse – and you are standing 500km apart from this lighthouse,” Alex Bohn, first author of a paper [PDF] detailing the photograph, to be published in The Astrophysical Journal Letters, told The Register.

Now, scientists using the Very Large Telescope array at the European Southern Observatory (ESO) have managed to capture not one but two planets around a main-sequence star like our Sun. 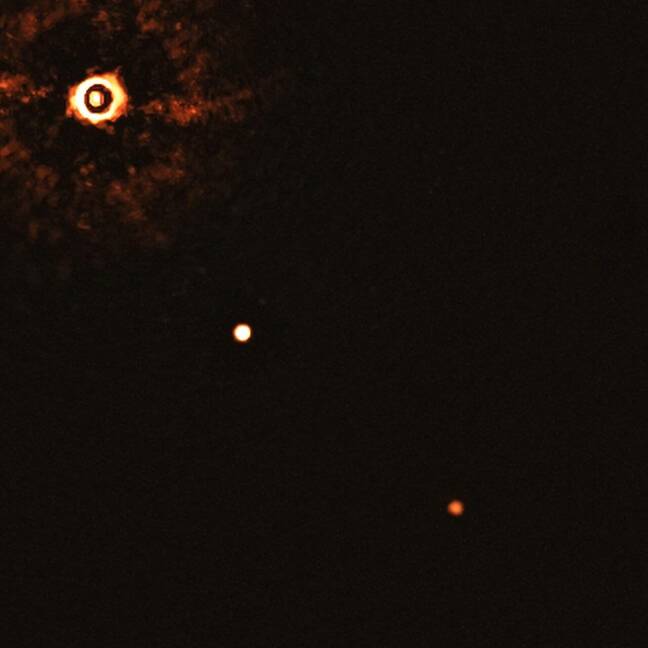 The system, dubbed TYC 8998-760-1 and which is roughly 300 light-years away, contains two gas giants in far-flung orbits. The distance between the inner planet and its sun is 160 times the distance between the Earth and our Sun, while the outer one is even farther away at 320 times. They’re also much heftier compared to the planets in our own Solar System, and are 14 and six times the mass of Jupiter, respectively.

Bohn, a PhD candidate at the Netherlands' Leiden Observatory, believes the image reveals a system in the early stages of its life. “This discovery is a snapshot of an environment that is very similar to our Solar System, but at a much earlier stage of its evolution," he said. The star has pretty much the same mass as the Sun, but is much younger at 17-million-years-old compared to our middle-aged 4.6-billion-year-old star.

The European Southern Observatory has a video summary here:

The image was snapped using the SPHERE instrument that operates in near-infrared wavelengths on the Very Large Telescope. The star is in the top left corner, and the two splodges are its exoplanets.

The team hopes to study how planets form so far away from their host stars. It’s possible that they were forged from the collapse of a protostellar cloud or they might have once been nearer to the star and were kicked further away by interacting with some mystery, undetected third object. ®