Astrophysicists have spied an extremely rare type of supernova from an exploding and possibly radioactive white dwarf that emits mysterious flashes of UV light.

A white dwarf star in a binary system goes nova when it strips enough matter from its companion star to reach critical mass. The aged star will blow apart, shedding its outer layers and ejecting bright bursts of electromagnetic energy. These events, known as Type Ia supernovae, happen fairly frequently.

But the supernova, codenamed SN 2019yvq and described in a paper published in The Astrophysical Journal, has left researchers scratching their heads.

In December, NASA's Neil Gehrels Swift Observatory detected an odd UV flash that persisted for days after it exploded in a galaxy 140 million light years away. The bizarre flare was a telltale sign that astronomers had discovered something very strange. 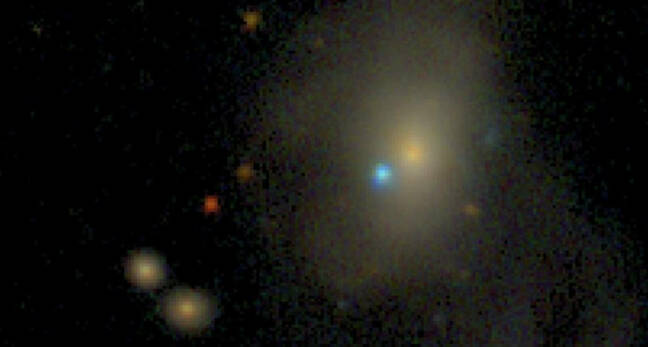 The blue dot is SN2019 vqn in the galaxy NGC 4441. Image Credit: ZTF/Northwestern/Caltech

"Type Ia supernovae do typically emit light at ultraviolet wavelengths, but it is a very, very small amount," Adam Miller, first author of the study and a postdoc researcher at Northwestern University, told The Register.

"More than 80 per cent of the energy emitted by Type Ia supernovae comes in the form of visible light, while just a few per cent is emitted in the ultraviolet. During the UV flash associated with SN 2019yvq, there was more energy radiated in the ultraviolet than the visible. This is very rare."

Scientists have only seen one supernova like SN 2019vqn, back in 2015, and no one has been able to work out the source powering the bolts of UV light. White dwarfs normally don't have high enough temperatures to muster something as energetic as these flashes.

"The simplest way to create UV light is to have something that's very, very hot," Miller said. "We need something that is much hotter than our Sun – a factor of three or four times hotter. Most supernovae are not that hot, so you don't get the very intense UV radiation. Something unusual happened with this supernova to create a very hot phenomenon."

Miller and his colleagues speculate that there are only a few possible scenarios that could produce the flashes. The white dwarf star behind the supernova might have swallowed enough of its neighbouring star that both their matter collided, creating an outburst of UV energy. Or perhaps, its companion is also a white dwarf star and the pair smashed into one another to trigger UV explosions.

It's also possible that the hot radioactive elements in the star's core reacted with material in its outer layers to create an extremely hot shell of matter capable of emitting UV light. In another alternative, the star's helium ignited the carbon found internally, causing it to detonate.

"This has important ramifications for a lot of our understanding of the universe. For instance, we know that most of the iron in the universe is created in Type Ia supernovae," he said.

"Type Ia supernovae are also one of the primary probes that we use to study dark energy. If we can understand these explosions better, then we may be able to learn more about the mysterious nature of dark energy."

Unfortunately, the scientists don't have a lot of data to analyse considering it's only the second time they have observed such a peculiar phenomenon.

"One thing we need to do is find more examples of these supernovae with UV flashes. The best way to do that is to discover the explosions while they are still in their infancy. This is one of the main goals of the Zwicky Transient Facility, a survey that is being conducted at the Palomar Observatory, just outside San Diego, California," Miller concluded. ®

Subject to conditions: offer only valid if you can get Starship off the ground
Networks2 Dec 2022 | 15