Oh, you shouldn't have: Microsoft whips up website for devs that makes it easier to moan about Windows issues

Just be careful it's not 'out of scope'

Microsoft has created a new landing page for developers, along with a dedicated feedback repository for reporting issues with Windows.

The web page is said to be "for developers building and deploying apps and systems running on non-Microsoft operating systems like Linux and Android". Is it, though? There are eight primary "development paths" shown on the new landing page, these being Node.js, Python, Android, Windows Desktop apps (!), C++ and C, C#, Java on Azure, and PowerShell.

There is also a focus on Windows Subsystem for Linux, which has advantages for programming platforms born in a Unix-like environment, such as Node.js. Things like MAX_PATH and different rules about special characters can, for example, still trip you up. Further, if the target platform is Linux, it makes sense to develop and debug on Linux, and WSL 2 qualifies.

Microsoft's target seems to be in part Mac users, since the page also has stuff on "transitioning between Mac and Windows" – though one issue the company cannot overcome is that compiling for iOS still requires a Mac.

The company may also be trying to address the fact that .NET Core is still perceived as a Microsoft platform. The challenges facing .NET even go beyond that, as noted recently by developer Dustin Gorski. 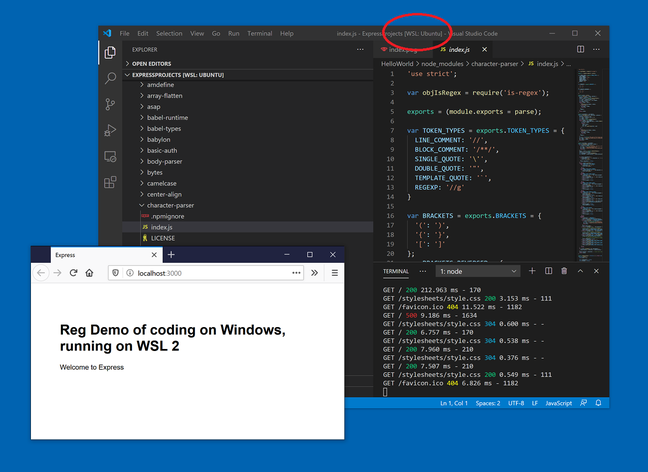 ".NET has a high cognitive entry barrier," he said, complaining about the confusion between ".NET, .NET Core, Mono, Xamarin, and the relation between C#, F#, VB.NET and what a target framework or runtime is." Gorski said Microsoft has "failed in making .NET a more beginner-friendly language", changes its mind too often as with the "very short lived .NET Standard", and is about to do so again with .NET 5. Gorski contrasted it with PHP, which "hasn't lost the beauty of its original simplicity", and Go, which has "remained faithful to its original simple design". Another issue is that .NET has been tied too closely to C#, causing issues for other languages such as F#.

Microsoft is right to look at its documentation as a path towards mitigating such issues, but a new landing page can only go so far. For those using non-Microsoft languages and frameworks like Node.js or Python the situation is not too bad; there are some getting-started guides and tutorials following which a developer can be expected to head over to the communities for those environments for further guidance. But the challenge of documenting .NET in a way that it is both beginner-friendly and easy and helpful for experts to navigate is huge and the current effort falls short.

Developers working in Windows are also invited to head over to a new GitHub repo. "The purpose of this repo is to collect and catalog issues that affect/impact developers who work on Windows," Microsoft said, explaining that it covers all those coding in Windows, irrespective of their target platform.

That sounds like a broad scope, but it is not. "At present we are accepting developer-oriented performance issues," the introduction continues, going on to list many areas which are "out of scope" including any specific framework like .NET Core or WinUI, Windows Subsystem for Linux, and Windows Terminal.

What about Visual Studio? "If you have an issue specific to VS, then you should file that feedback with VS via the Send Feedback button in VS. However, if you're having issues with the way VS works in Windows per se (e.g. slow to access files, etc.) then it may be something we can help with," said Senior Program Manager Richard Turner, who is driving the effort.

He added that the initiative is cross-team, cross-division, and comprises a "group of reprobates who're all passionate about improving developers' experience on Windows" – though with "senior exec sponsorship and support".

It is obvious that Turner and others feel that the current feedback processes, such as the Feedback Hub in Windows 10, feedback options within Visual Studio, and sites like Microsoft's Tech Community, are insufficient to bring bugs and annoyances to the attention of the engineers who can fix them.

Determining which issues qualify is challenging for users and the new site is likely to attract all sorts of cases. "We need a new file explorer", "Please enable event viewer logging for file locked by process X … detailing reasons why a certain file was locked", and "Stop redirecting to MS Edge from the Windows start menu search" have all already been rejected as "out of scope".

Another user complained about the confusing "New Project" window in Visual Studio 2019 as being "extremely painful and a burden on education and development time". Still open at the time of writing, but one suspects "out of scope".

Many Windows users will relate to another issue raised. "Windows search is painfully slow." It is a mystery to us too. If you want to cripple a Windows box, just try searching a large directory in File Explorer. We have lost count of the number of times Microsoft has promised improvements. Whether or not a new official "issues with Windows" site really makes sense, if it could fix this one thing it will all be worth it. ®