Red Hat Enterprise Linux (RHEL) 8.3 has hit beta, with security and production stability pointed to as key goals for the update.

RHEL 8.0 was released in May 2019 and introduced the concept of "Application Streams", based on a separate repository dedicated to "all the applications you might want to run in a given userspace" including tools, runtimes, database managers and web servers. The smart piece is that there are "multiple virtual repositories within one physical repository" so users can fix on a particular version of an application but still get security and bug updates.

Another key feature in RHEL is System Roles, which are Ansible modules for configuring the system. System Roles were introduced (in preview at the time) in RHEL 7.4. Ansible is Red Hat's automation platform.

The release cycle for RHEL provides for new minor releases every six months. RHEL 8.1 appeared in November 2019 with live kernel patching, and RHEL 8.2 in April this year with a new application stream for Red Hat container tools. We can therefore expect RHEL 8.3 to be generally available around three months from now. 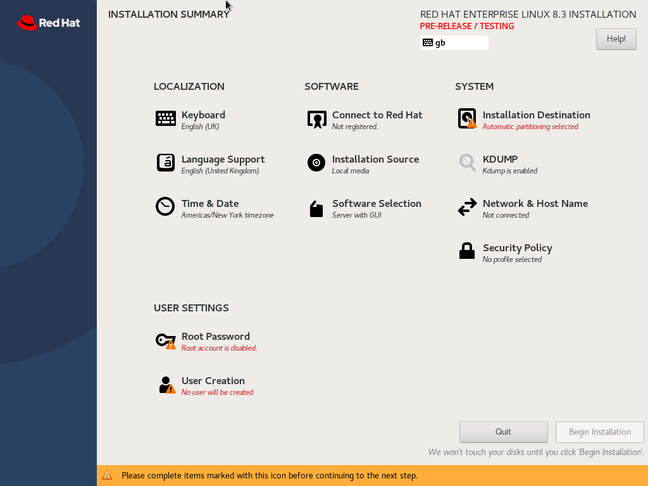 The RHEL 8.3 installer requires the admin to specify usernames and passwords before the installer touches the disk

RHEL 8.3 beta updates the Application Streams to newer versions such as Node.js 14, PHP 7.4, Ruby 2.7, and LLVM 10. New System Roles are provided covering System Logging, Metrics, and network-bound disk encryption, which enables encrypted volumes to be bound to a network server so that decryption is only available on a specific secure network. The new System Role will make this easier to configure.

The full release notes for the 8.3 beta are here with new features listed towards the end. A revised installer will not let you proceed until after setting a root password and creating a user, whereas in previous versions this occurred later in the install process. The kernel is version 4.18. A new password expiration notification tool will display lists of users with passwords about to expire and send them email notifications. The VNC server tigervnc has been upgraded to version 1.10.1 with numerous improvements and removal of the need for a Java web server.

RHEL 8.3 beta is available to customers for testing now, and developers can get it for free via Red Hat's developer portal. ®