Passengers that go into space aboard Virgin Galactic's SpaceShipTwo won't just experience weightlessness: they'll also get to watch themselves float in a giant mirror and enjoy decor designed to remind them of Earth's oceans and deserts.

The spaceplane was designed to provide “safety without distraction, quietly absorbing periods of sensory intensity and offering each astronaut a level of intimacy required for personal discovery and transformation."

Helping things along are “halo windows” that “are used to subtly reflect back and therefore elevate the human responses to each of the contrasting stage of flight.” 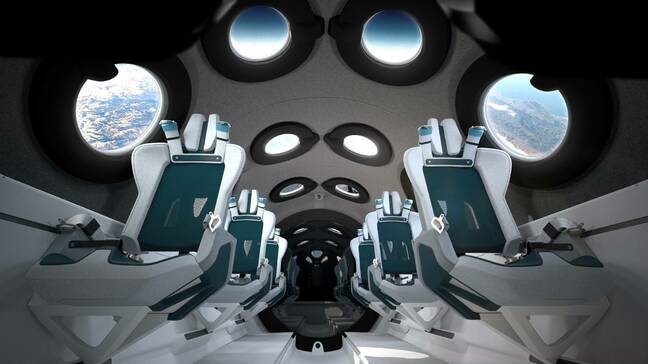 SpaceShipTwo also has mood lighting and handholds around the windows to help passengers during the six-minute weightless portion of the flight. And then there's a large mirror located at the end of the cabin that “allows astronauts to view themselves weightless while illuminated by the natural brightness of the Earth.”

For those who might be a bit stressed by being strapped to a bomb designed to carry them beyond the only atmosphere known to be breathable by humans, the plane also features a colour palette thoughtfully designed so that the “golden metallics resemble luminous desert sands, blues conjure celestial spaces and teals inspired by the ocean, ground travellers back to Earth.” Each seat is also fitted with screens that display flight data as well as cameras to record passengers’ experience.

Virgin Galatic has not given a firm date for when it plans to start shooting people into space, but in 2018 SpaceShipTwo reached space for the first time and in May 2020 nailed another flight test.

Six hundred people have already put down $250,000 for a seat on the company’s first round of flights. Another 400 have paid $1,000 in refundable deposits to be next in line when tickets go back on sale.

The biz already has its commercial operating license from the US Federal Aviation Administration, but it has to work through a list of “verification and validation” milestones before it can welcome passengers onboard.

Russia, meanwhile, has re-launched its space tourism program and even offered the first citizen spacewalk, but at a cost likely to vastly exceed the price of a Virgin Galactic ticket. And with worse decor, too. ®