Analysis For six hours on Wednesday, the Western world's most powerful tech CEOs – whose businesses have become household names and touch every part of our daily digital lives – were grilled by US lawmakers regarding their market dominance.

The hearing was supposed to be a closing chapter in what has been a long-running probe into Apple, Amazon, Facebook, and Google, and their extraordinary power over everything from online ads and e-commerce to news to smartphones and smart homes, and everything in between.

A report is due sometime this year from Congress and it could form the foundation for new laws that restructure digital markets to ensure future competition; Facebook may be required to break off Instagram and WhatsApp; Apple may be forced to loosen control of its App Store; Amazon may have to stop competing with its own customers; Google may have to stop stealing content and screwing competitors.

If the report is anything like the hearing earlier today, however, it will be a mess. Apple, Amazon, Facebook, and Google's chief execs, Tim Cook, Jeff Bezos, Mark Zuckerberg, and Sundar Pichai, respectively, appeared before the House Judiciary Committee's antitrust subcommittee via video chat, and the experience was frustrating. 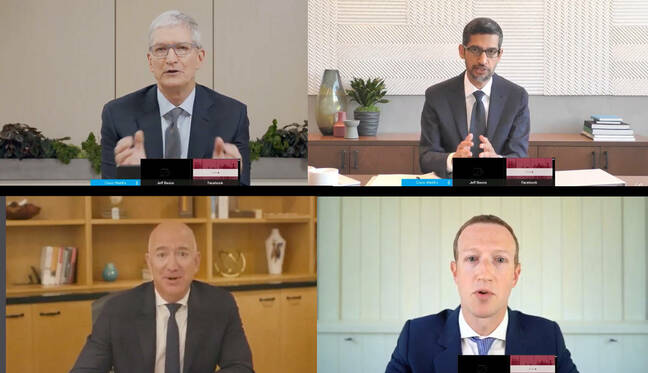 Despite significant quantities of first-hand evidence that tech giants have abused their positions as the controllers of online platforms to kill competition and boost profits at others' expense, a significant amount of the hearing was taken up by bloviating congressmen talking about tangential issues that had little to do with antitrust actions and everything to do with their re-election bids.

You can watch nearly the whole thing on YouTube if you have five hours to spare.

Some of it was outdated, such as Representative Jim Sensenbenner's (R-WI) view on antitrust actions no longer applying to the modern digital world; some of it was the worst kind of partisan political nonsense, such as Rep. Matt Gaetz (R-FL) treatises about China and claims that conservative voices were being censored. Some of it seemed off-topic, such as Rep. Ken Buck (R-CO) long rant about Communist China, complete with an aide holding up a picture of Uighurs being forced onto a train behind him.

Jesus - Rep. Buck goes FULL AMERICA at the start of his time. We destroyed the commies, landed a man on the moon...

As he speaks, his aide holds up a picture behind him. This is a tech CEO hearing... pic.twitter.com/Izfvw9XD2W

And some of it was just plain embarrassing, as when Rep. Greg Stuebe (R-FL) repeatedly complained about his personal email to the CEO of Google, citing problems his mom and dad were having.

Rep. Steube complains to Google CEO about his campaign emails going to Gmail spam boxes and says that it's only happening to republicans. (No, pretty much every campaign deals with email delivery issues.) pic.twitter.com/XH1floO9ff

On the plus side, some of the lawmakers came prepared and repeatedly pierced the veil that the lovable tech companies were putting up to reveal what really happened behind it, putting even extremely well prepared CEOs on the back foot.

When we say lawmakers, though, we mean the congresswomen because it was notable, even stark, that the members of the committee that made unfocused, irrelevant or wild statements and allegations – that were often no more than political grandstanding that made the hearing largely pointless – were all men. By contrast, every woman – including Rep. Val Demings (D-FL), who clearly had little understanding of the tech market but had staff who did – provided the kind of questioning that we like to imagine Congress carries out all the time.

Reps. Lucy McBath (D-GA) and Pramila Jayapal (D-WA) stood out for asking precise questions with specific information and, for the most part, allowed the CEOs time to respond. Their exchanges made the monster marathon of a hearing worthwhile and may set the groundwork for serious and significant changes.

So what actually happened of note?

Because of the structure of the hearing where members got five minutes to ask questions and the CEOs were on video in their offices, the most important parts of the hearing came in the same format:

In this way, Amazon's claim to be a benevolent dictator was repeatedly exposed. Most notable was when Jeff Bezos accepted that while he called third parties on his platform "partners and customers" in public, in private and inside Amazon they are known as "internal competitors."

The most effective line of questioning came with precise examples: a business that sold diapers that was targeted and ruined by Amazon; another that sold textbooks that was booted out of the Amazon online market and never given a reason why.

Bezos' most shaky moment came when he was forced to admit that Amazon's staff get access to all the internet souk's data behind the scenes and can use that to decide which new products to sell: something that competitors have long claimed is a clear abuse of Amazon's position as owner of the platform.

Facebook CEO Mark Zuckerberg also had a tough time on occasion. Faced repeatedly with internal Facebook emails that showed how the social network had consistently used its position to screw competitors, he kept shifting position, before being caught again.

Zuckerberg's worst moment, however, came by his own hand. During an exchange over the purchase of Instagram, which Representative Jerry Nadler (D-NY) argued was done to eat up its competition, crush rivals, and control the photo-sharing market, Zuckerberg gave a list of other companies that were in the market at the time. None of them exist any more, and what's more, even this tech journalist could only remember two.

"Mr Zuckerberg, you're making your point," Nadler responded. The fact that there was a thriving market and now there isn't is exactly the problem: that Facebook uses its power and money to steamroll competitors, and control and destroy markets, was the implication.

Google's Sundar Pichai came out of the hearing a little better off, despite occasional traces of racism in those questioning him.

Again, however, the platitudes of how incredibly beneficial the tech giants have been to the economy were pulled apart a little when Representatives used examples, pointing out how companies like Google played both sides of the game because of the extraordinary access and control they have over the market itself. They both play in the market and set its rules. And, on occasion, decide that those rules shouldn't apply to them.

Pichai also frequently used the "I don't recall" excuse as a way to explain away clear examples of Google's theft of others' content, including Yelp's listings and Genius's lyrics. Genius even famously set a trap for Google scrapers, embedding the word "REDHANDED" in Morse code into their lyrics by alternating apostrophes in the text. The same text appeared on Google's pages.

As for Tim Cook, the big target of Apple's anti-competitive behavior is its App Store, where Apple decides what appears and what doesn't and imposes a cut on everyone's revenues.

Cook seemed the most confident in his answers and was caught out least. His explanation for why Apple removed parental controls apps from the App Store when it launched its own ScreenTime app – because they were a security and privacy risk – came across as extremely confident, even beneficial.

Until the follow-up revealed that those apps were allowed back on the App Store six months later with minimal change, but by which time ScreenTime had effectively taken over the market.

Whenever pressed on Apple's clear market control and profiteering from apps, Cook repeatedly reverted back to the same two answers and one exposition: we haven't raised our (30 per cent!) cut on apps since day one; there are other smartphones on the market; and look what a wonderful thing apps have been.

All CEOs also kept using variations of the same excuse for why they couldn't respond to questions, of why they weren't relevant: it all happened so long ago – by which they typically meant more than four years.

Except, of course, by doing that the CEOs highlighted the exact problem: their behavior in the past allowed them to squash the competition with the result that there is no one left to challenge their market dominance and so expose the same tendencies.

This hearing was a mix of the best and worst of Congress but it was also a decade too late. ®