Microsoft finally spills the beans on everything you need to know about its low-code platform, Dataflex for Teams

Or maybe you want a List. Or a Task. Or a Planner. Just bung it into Teams

Microsoft has shared more details about Dataflex, its low-code/no-code app platform that will be embedded into Teams - something it should have done much earlier to help demystify things.

Dataflex was announced at Microsoft's partner conference, Inspire, earlier this month, but its initial introduction lacked any explanation of how the licensing worked or the exact differences between Dataflex and Dataflex Pro (formerly known as the Common Data Service).

That gap has been somewhat filled by a new post, which sets out the capabilities and differences, as well as introducing what looks like another naming tweak: the cut-down version will be called Dataflex for Teams.

Teams is cobbled together from a variety of pre-existing Microsoft applications, and it may help to think of Dataflex as a Dynamics 365 component. Some of the jargon makes sense to those with Dynamics expertise but not so much to newcomers – things like the Common Data Model (CDM), which is "influenced by data schemas that are present in Dynamics 365". Dataflex for Teams may be significant, though, since publishing an application as a tab within Teams makes it immediately accessible to users working in that environment.

In the new post, Microsoft's principal product project manager for Dataflex, Marc Mercuri, explained what Dataflex for Teams will be able to do in five areas. One is called Environment, the logical container for apps and data in Dataflex for Teams. There will be a limit of one environment per team, with 2GB capacity, and support for backup and restore. Dataflex Pro by contrast has up to 4TB space and unlimited environments. Even 2GB will typically support up to one million rows of data, Mercuri said.

The data in Dataflex for Teams is relational and includes a user table based on the Common Data Model (CDM) with support for other CDM tables "coming soon". Users can also add files including images. Data visualisation with charts and graphs is supported but features including paginated reports (based on SQL Server Reporting Services), offline mobile apps, and API access are reserved for Dataflex Pro. 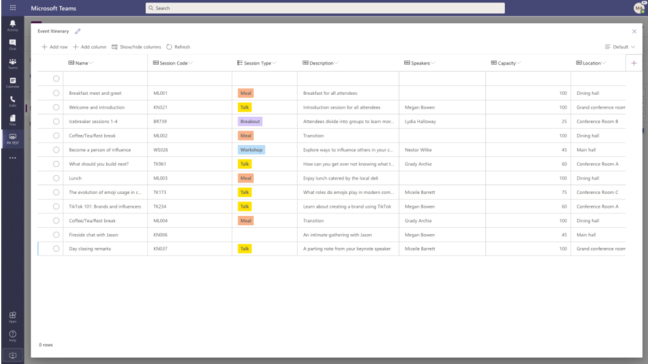 Building a data grid in Dataflex for Teams

According to Mercuri: "With Dataflex for Teams, integration is delivered primarily via connectors. Support for both standard connectors and the ability to use the Dataflex connector (formerly the Common Data Service Native Connector) to connect to a Dataflex for Teams environment are included."

Sounds good, but Mercuri then noted that this does not include "Premium" connectors, which require an additional Power Apps license. Although Dataflex for Teams' data will be in Azure SQL, it is not accessible via SQL Server Management Studio, whereas this is possible with Dataflex Pro. You can count on Microsoft to make this complicated; by way of example, the existing (pre-Dataflex) licensing guide is here.

"I'm sure it's fun to make up new SKUs and debate what features they should have etc. But please be aware that every time you do you dump the complexity onto the partners and IT pros who have to try to navigate the best way through and try to answer business questions," said a comment on Mercuri's post.

The development environment for Dataflex for Teams will itself be within Teams, and there will also be an option to install solutions and templates from a gallery. Users will have access to Power Automate for building workflows. Applications will initially follow the Canvas approach with the alternative Model-driven coming later: this is more jargon, with "Model-driven" closely tied to Dynamics 365. The security model in Dataflex for Teams is based on that for Teams itself, with users categorised as Owners, Members or Guests. There is activity logging, but features such as auditing, sharing, or field-level security are reserved for the extra cost Pro edition.

The key feature of Dataflex for Teams is that it is included in a Teams licence, avoiding both the hassle and expense of Dataflex Pro licensing. Examples of the type of application users can create from Power Apps templates are asset checkouts, budget trackers, cost estimators, leave requests, service desk case submission or management, site inspection reports and more. There are also plenty of potential pitfalls, including application sprawl, non-experts creating buggy, slow or hard-to-use applications, and IT departments getting additional support requests for applications created by users.

What about Microsoft Lists, now rolling out to general availability? Lists are also integrated with Teams and allow users to "track issues, manage inventory, build out event agendas, report status", overlapping with the use cases for Dataflex. Lists are derived from SharePoint rather than from Dynamics. Other relevant applications are Microsoft To Do, Planner, and Tasks in Teams.

The difficulty with having many ways to do things that are nearly but not quite the same is that organisations can end up with little bits of data everywhere when it should be kept together: already a problem if too many Teams get created, each with its own SharePoint site. The idea of Teams was to meld the disparate elements of Office 365 (now Microsoft 365) into a coherent and usable platform, but chucking everything into it could have the opposite effect unless carefully managed. ®