23 cameras, microphones and a helicopter on the rover to see and hear the Red Planet in living technicolor

Perseverance, the heaviest and most complex Martian rover yet, is on its way to the Red Planet aboard an Atlas V rocket that blasted off from Cape Canaveral, Florida, on Thursday.

NASA had a small launch window until the end of August to send the nuclear-powered bot off into space before Earth started moving away from Mars in its orbit around the Sun. The launch date was originally set for 20 July, but was postponed twice until 30 July after engineers detected an off-kilter liquid oxygen sensor.

It is expected to land on Mars on 18 February 2021, using the ingenious landing system NASA engineers call Seven Minutes of Terror. Completely autonomously, the probe will deorbit, enter the atmosphere, slow itself down using the world's largest supersonic parachute and then detach and use rockets to hover over Mars and lower the rover on cables.

Just like its predecessors – Curiosity, Spirit, and Opportunity – Perseverance is also on a mission to hunt for signs that Mars was once habitable. The smoking gun will be direct evidence of microbial life – dead or (massively improbably) alive – hidden in its soil or rocks. The rover can also bottle up particularly intriguing samples of Martian material in tubes for future sample return missions.

The six-wheeled SUV-sized metric-ton rover will land on the Jezero Crater, a 30.4-mile-wide region that scientists believe was once a lake. Images show grooves that look like river channels of sediment formed in a river delta. 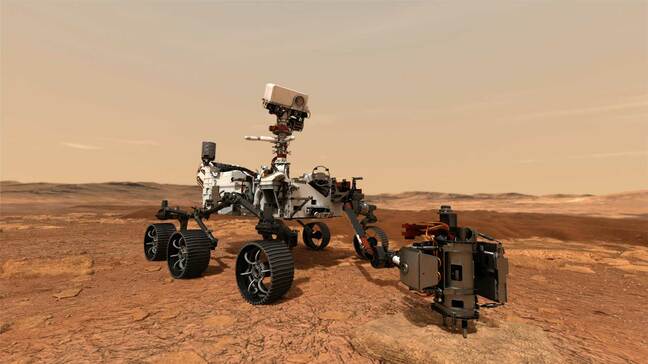 Illustration of Perseverance ... The most advanced Mars rover yet, and it even comes with its own helicopter. Credit: NASA/JPL. Click to enlarge

Lasers and drills and radar, oh my!

Once Perseverance settles in the crater, its seven main instruments will begin taking data. These include:

It also has Ingenuity, an autonomous helicopter strapped to its belly. It's the first time that a flying gizmo will set foot on another planet besides Earth. The 1.2-meter 'copter will whizz ahead of Perseverance to look out for any interesting bits of terrain.

Power comes from 4.8kg (11lb) of plutonium dioxide that emanates heat, which is then converted into electricity. The multi-mission radioisotope thermoelectric generator, as it's snappily titled, is engineered to last for 14 years and is augmented by two lithium-ion batteries for extra grunt when needed.

All in all, the rover hosts 23 cameras, multiple types of spectrometers and lasers operating at different wavelengths, numerous sensors, and two microphones. Scientists are curious what being on Mars sounds like, and expect to hear the stirring of wind and dust as well as the short pop sound of the laser vaporizing its surroundings.

Finally, the rover is also carrying bits of spacesuit material, including a chunk of a helmet visor and a patch of lightweight Teflon. Amy Ross, a spacesuit designer, wants to test new types of materials for its ability to stay dust-free and the time it takes to wear down from radiation.

NASA says the expected mission life is one Martian year, or 687 Earth days. Then again, the agency is notorious for lowballing expiration dates – the Opportunity rover was designed to last at least 90 Martian days (92.5 for Earth), but ended up operating for more than 14 years until it was lost to a dust storm in June 2018. ®