A bit of computing history has been inadvertently unearthed in the Netherlands after a refit of a shop revealed signage for long-forgotten computer brand Gateway.

The (in retrospect hideous, but also iconic) Holstein cow-print design was spotted by Reg reader Tom Hill while on holiday in the Hague.

"We walked past this old shop during refurbishment and could see the builders were busy working. (Portaloo strategically placed near the doorway)," he told The Register. 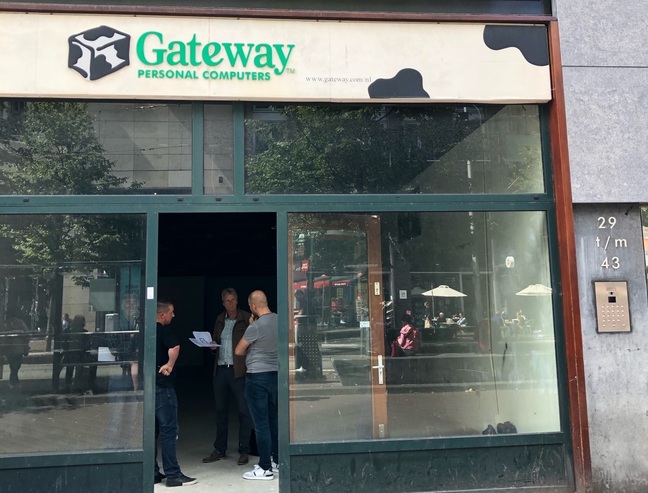 Ruins of ancient Gateway shop unearthed in the Hague

"Me and [my] partner reminisced about the days we were 'allowed to use the internet'. Back in the days when we were 12 years old and had to put up with 56k dial-up connection to a white box."

Gateway (briefly known as Gateway 2000) played a small role in the personal computing revolution. It also has perhaps the most unlikely origin story of any tech company of the era – except perhaps for Apple.

It started life on a sleepy South Dakota farm, not far from the border with Iowa, but miles away from the tech hotspots of Texas (home of Dell) and California. Gateway machines were assembled in America after most manufacturers had started shipping jobs offshore. At the same time, its marketing was surprisingly charming for a company that largely shipped uninspiring beige boxes.

Unlike other vendors that hitched their wagon to retail, Gateway focused for a time on selling high-spec custom machines via phone and mail order. It subsequently switched towards cheaper mass-produced devices, such as the $799 all-in-one Astro.

It wasn't plain sailing. While Apple and Dell swallowed up market share outside the US, Gateway's business model made it difficult to scale overseas. The firm also made some questionable acquisitions, including Amiga in 1997. Meanwhile, its US-based assembly lines kept production costs high, leaving it at a disadvantage compared to other vendors who shifted jobs overseas.

In 2004, Gateway acquired eMachines and the latter's CEO, Wayne Inouye, took the reins. Inouye began a process of aggressive outsourcing that saw the firm's payroll shrink, but at a cost to its corn-fed Midwestern public image and general goodwill.

Acer absorbed Gateway just a few years later. Now all that remains of the once-popular computer vendor are a few loft-bound dusty towers. And the remnants of its brand clinging to signage of a shop in the Netherlands.

If you're tempted to pay it a visit, you can find it on a street called Spui, next to the junction of Kalvermarkt. We understand if you can't be bothered. ®